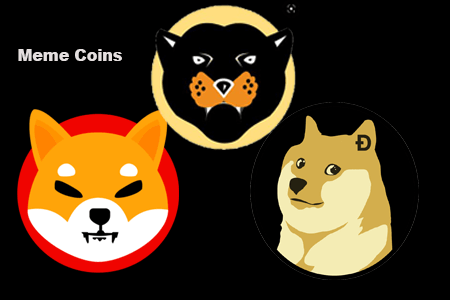 It’s no longer news that Meme coins have done significantly well in the Crypto market this year. They have successfully managed to hold their ground and become some of the market’s most valuable and popular coins.

What is Meme Coins?

According to John Wu, president of Ava Labs, the team behind altcoin avalanche, simply describe it as “These are driven by culture and represent an underlying theme or movement, rather than special technical use cases.”

Although meme coins are sometimes associated with rug pulls, not all investors choose to invest in them. Investors looking for technological support should avoid these coins because they only appreciate in value when there is a surge in market demand. As a result, investors interested in joining the meme coin community should begin by purchasing those with the biggest market capitalization.

With the likes of Shiba Inu with its massive run, the coin is now the top meme token and eighth-largest cryptocurrency overall after its founding just over a year ago in August 2020.

Wakanda Inu is the newest member of the meme coins that, was launched last week and have shown great potentials after its massive run.

Wakanda Inu is a community meme project forged from the deep and warm consciousness of humanity. Wakanda Inu (WKD), the digital meme token that represents the daily struggles and aspirations of the best aspects of what it means to be alive – truly alive as a community.

Wakanda Inu has now broken the records of SafeMoon and Shiba Inu meme coins for the largest number of holders 5 days post-launch.

Introduced as a “joke currency”, Dogecoin quickly developed its own online community and reached a capitalization of US$60 million in January 2014.

Fast forward today in 2021, Dogecoin has grown so much and has gathered mainstream attention. It has become a meme that is used by the likes of Tesla billionaire, Elon Musk and even more so spunned off even more meme coins into the market.

Dogecoin is now ranked ninth in terms of market capitalization in the cryptocurrency market. The cryptocurrency is the largest meme coin, with a market valuation of approximately $37 billion. Its trading volumes have also grown to $3 billion in the last 24 hours, indicating greater buyer interest in the coin.

Shiba Inu (SHIB) is a meme token that began as a fun currency and has now transformed into a decentralized ecosystem.

Shiba Inu’s market capitalization is now about $31 billion. Shiba Inu hit an all-time high of $0.000086 in October before falling to lower levels. Following Shiba Inu’s advances in October, several people became affluent from their SHIB holdings, leading to conjecture that these people are selling now, causing the present drops.

Safemoon is the 76th most valuable meme coin in terms of market capitalization. It has a market cap of over $2 billion and strong trading volumes, indicating that it has piqued the curiosity of crypto market participants.

BabyDoge was launched in June 2021 and has an ambitious roadmap that includes further efforts for pet charity, NFT creation, GameFi, and more.

BabyDoge is a meme coin that is relatively fresh to the market. It was just five months old when it was introduced, but in that time it has grown to become one of the most popular coins, with a market worth of $529 million. The meme coin has risen by over 200 percent in the last month, indicating that it has the potential to rise even higher.