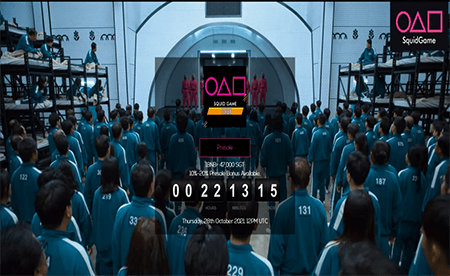 The Squid Game project is a crypto play-to-earn platform on the BSC chain inspired by the Korean hit series on Netflix about a deadly tournament of children’s games. SQUID is the only token that can be used in Squid Game. You will need SQUID to participate in a game or get restarted after you fail the game.

In order to participate in each round, players will, however, be required to pay a set amount in squid tokens, and certain rounds may also require users to purchase a custom-made NFT available on the company’s website.

According to CoinMarketCap, the SQUID coin is currently at $3.30 USD with a 24-hour trading volume of $5,775,558 USD. Hitting 361.14% in the last 24 hours.  The SQUID token cannot be sold on Pancakeswap, a popular decentralized exchange.

Although the white paper for the coin doesn’t explain why some users cannot sell their tokens, it does describe an anti-dumping mechanism that prevents people from selling their coins if certain conditions are not met.

The parody coin, which reportedly sold out in one second after launching its presale on Oct. 20, joins a long list of parody cryptocurrencies that have skyrocketed for no specific reason, other than good press. For example, Shiba Inu coins doubled in price in the last week.

Related Topics:CryptoCryptocurrencySquid Game
Up Next