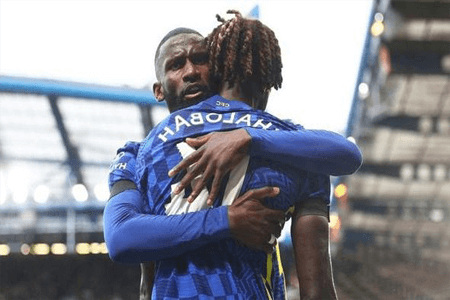 Chelsea defender Trevoh Chalobah has been rewarded with a new contract after his impressive start to the new season in which he made his senior debut for the club.

The Chelsea young defender who turned 22 in July has signed a new four-and-a-half-year contract with his childhood club and will be looking forward to having a successful season with Chelsea.

He has been involved 10 times under Thomas Tuchel so far this season and has scored two goals this season with his first goal coming from that outstanding shot against Crystal Palace on his first appearance at Stamford Bridge.

On signing his new contract, he stated:

‘It’s quite surreal. It’s a dream for me to sign a new long-term contract for my boyhood club and hopefully, the dream continues.

‘It’s been an unbelievable start to the season and something I never expected but it just shows that the hard work I’ve put in and gone out on loans has paid off.

‘I tried to impress the manager in pre-season and then take that into the games so it’s been good and consistency now is the key to keep those high levels.’

His coach Thomas Tuchel and the entire Chelsea board are pleased with his performance so far and will be hoping he continues to improve throughout his new contract.

Advertisement
Related Topics:Chelsea
Up Next