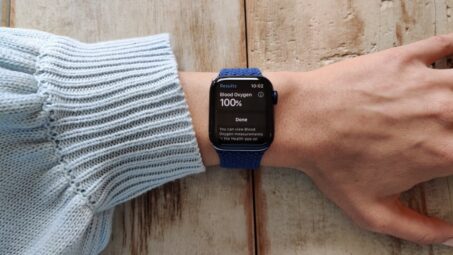 The new Apple’s flagship smartwatch Apple Watch 6, measures blood oxygen level which is what makes it different from its predecessor Apple Watch 5. In this article, I will be showing you how you can use blood oxygen monitor on the Apple Watch.

One of the reason Apple introduced this feature in Apple Watch 6 was because of Covid-19, given the fact it has been found to be an early indication of the virus.

However, Apple is clear that it’s not a medical tool, and should only be used for monitoring general fitness or wellness – so while it’s an interesting thing to check out from time to time, it doesn’t feel like a headline feature.

How the Blood Oxygen Feature in Apple Watch Works

The oximeter uses your watch’s built-in blood oxygen app, which you can use to manually trigger an on-demand blood oxygen check. However, your watch can also conduct periodic background readings over the course of the day.

The blood oxygen sensor is composed of four LED clusters and four photodiodes integrated into the back of your watch case. The green, red, and infrared LEDs shine light onto the blood vessels in your wrist, while the photodiodes assess the amount of light reflected back. The technology then detects the color of your blood as a sign of how much oxygen is present.

In general, a “normal” or safe blood oxygen level should be somewhere between 95% and 100%. Although your mileage may vary slightly, consistent readings less than 90% are considered low and a potential sign of some underlying condition.

How to use blood oxygen monitor on the Apple Watch?

The below step will show you how you can easily turn on blood oxygen monitoring in your Apple watch.

Step 1: Open the Watch App on your iPhone and click on Blood Oxygen option.

Step 2: Toggle the blood oxygen measurements to switch it on if it’s not already on.

Step 3: On your Apple Watch, after enabling the feature on your iPhone, click on the digital crown to activate your apps screen. Then look for the icon with blue and red swishing lines, forming a circle against a white backdrop and click it.

Step 4: An instruction alert will appear on the screen for few guidelines especially if the watch is not properly fitted on your wrist. The watch must not be too low on your wrist or too tight and the Apple watch screen must face upward.

Step 5: Once in position, tap “Start” to activate a 15-second countdown timer and a psychedelic blue and red on-screen animation. Once the timer is up, your blood oxygen will display as a percentage.

With the Aforementioned steps, hope you were able to use the blood oxygen monitor on your Apple Watch 6.

How to Hide Old Unwanted Facebook Posts From Your Profile

How to Know Who Called You When Your Phone Was Off