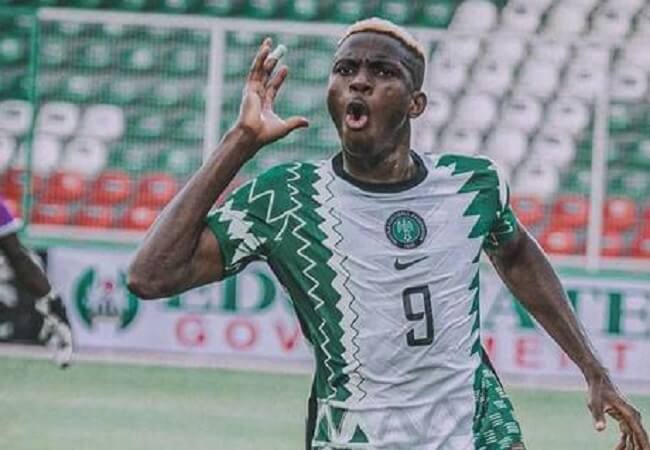 On four occasions, the Napoli striker was on target as the Super Eagles blew aside the Central African country on Monday afternoon.

With a spectacular 10-0 thrashing of Sao Tome and Principe on Monday afternoon, Nigeria improved their hopes of qualifying for the 2023 Africa Cup of Nations.

The hosts came into the game looking to get back on track after losing 5-1 to Guinea-Bissau in their first Group A match on June 9.

The Super Eagles, on the other hand, were victorious after putting up a remarkable attacking performance against the Falcons and the True Patriots.

The West Africans started the eight-goal thriller on a high note, dominating ball possession but unable to find their attacking rhythm.

Moffi’s first international goal gave Nigeria a three-goal lead two minutes before the halftime break in a goal-filled first half.

Osimehen set him up after sprinting through Sao Tome’s goal area, and the France-based striker cut Ivonaldo before blasting past a stranded Braganca.

Despite their large lead, the Super Eagles kept pushing for more goals.

Former England youth international Lookman scored Nigeria’s first goal after capitalizing on a bad goalkeeping performance by Sao Tome and Principe before Osimhen scored his third and fourth goals, and Musa netted from the penalty spot in the high-octane match.

Nigeria now leads Group A with six points from two games, while the Central Africans are still without a point.

In September, the Super Eagles face Guinea-Bissau in their next match.

Latest Football Transfer Round Up For Today 14th June 2022