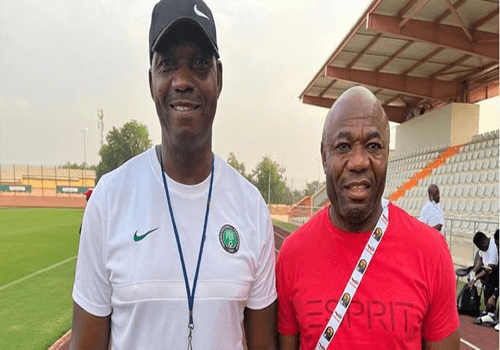 The Nigeria Football Federation has decided to retain Augustine Eguavoen as the new Super Eagles coach despite him failing to make the team get past the Round of 16 at Afcon 2021.

NFF will continue with the Eguavoen as Nigeria’s interim coach, thereby ending the possibility of Jose Peseiro taking charge as the next Super Eagles permanent boss.

You may also want to read AFCON 2021: Eguavoen Hits Back At Nigerian Fans Over Iwobi, Okoye Criticism

The Super Eagles’ former captain will prepare the team for the next month’s 2022 World Cup qualification play-offs against Ghana as they fight to make it to the November/December 2022 QATAR FIFA World Cup.

Former Tanzania head coach Emmanuel Amuneke has been appointed as his immediate assistant with Salisu Yusuf named as a second assistant coach and head coach of Nigeria’s Chan team.

According to the statement from NFF:

“The Nigeria Football Federation on Monday announced the reconstitution of the technical crew of the senior men national team, Super Eagles, with Augustine Eguavoen staying as an interim technical adviser while former Nigeria World Cup star and former U20 coach, Emmanuel Amuneke is drafted in as immediate assistant to Eguavoen,”

“One of the most garlanded footballers to have come out of Nigeria, Amuneke scored both goals that won Nigeria the 1994 Africa Cup of Nations final match against Zambia in Tunis, scored the goal that won Nigeria and Africa’s first Olympic football gold medal in 1996 and played in the 1994 and 1996 Fifa World Cup finals, scoring two goals in USA 94.”

“As a coach, the electrifying winger qualified Tanzania for the 2019 Africa Cup of Nations in Egypt and led the Taifa Stars in the finals. He is a member of both the Fifa and Caf Technical Study Groups.”