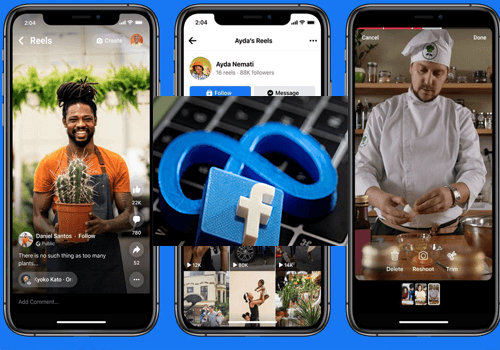 How to Make Money Online Creating Videos on Facebook Reels

Watching video is half of the time spent on Facebook and Instagram, and Reels is Meta’s fastest-growing content format.  The company is focused on making Reels the best way for creators to get discovered, connect with their audience, and earn money. They also want to make it fun and easy for people to find and share relevant and entertaining content.

What You Need To Know About Reels on Facebook

Reels are fun and inspiring short videos consisting of music, audio, AR effects, text overlays, and more, and you can now create them on the Facebook app on your mobile device! Your Reels are shared directly to your fans in their core News Feed and to new audiences in a dedicated Reels section in News Feed that gives people who are new to you the opportunity to discover and enjoy your creations.

Reels Play bonus program, part of Meta’s $1 billion creator investment, pays eligible creators up to $35,000 (14,564,900.00 Nigerian Naira )a month based on the views of their qualifying reels.

Reels Play on Facebook will pay a bonus to eligible Facebook creators whose Reels get at least 1000 views over a 30-day period on Facebook. Reels from creators in the invite-only program must meet Meta’s content monetization policies and the content must be owned by the creator in order to count towards the bonus.

The Reels Play on Facebook bonus program is currently invite-only. Creators who are invited will be notified in the Facebook App and in Creator Studio.

Anyone can create a reel on Facebook and become a creator on the global stage or just share them with friends and family.

Simply create a reel from the top of Feed or while you’re watching a reel and either select video clips from your camera roll or capture something new.

You can also tap Reels at the top of News Feed or within a group’s feed.

After you’ve created a reel, you can choose how to share it. Reels on Facebook are set to be public for creators who are over 18, but you can change the audience at any time. Audience options include Public, Friends, or Friends except.

How to Make Money Online Creating Videos on Facebook Reels

Advertisement
Related Topics:facebookFacebook Reels
Up Next