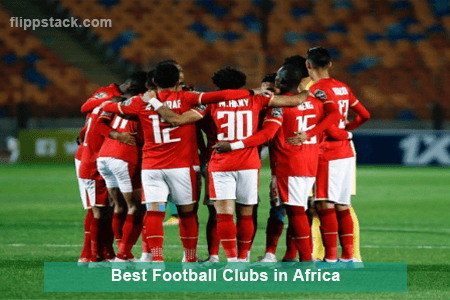 Africans have always produced the best footballers in the world such as Mohamed Salah, Didier Drogba, Jay-Jay Okocha, and Yaya Toure who are products of clubs in Africa before leaving to Europe to play for clubs in the biggest Football Leagues in the world such as the English Premier League, the German Bundesliga, the Italian Serie A, the French League 1, and the Spanish La Liga.

A few African players have also acquired foreign nationalities to play for other countries which many of them has played at the highest possible level in those countries, no doubt Africans are blessed with talents in terms of football.

Below are the latest Best Football Clubs in Africa:

The first on our list is Tout Puissant Mazembe (TP Mazembe), formerly known as Englebert is probably the highest-ranked football club in Africa. The Congolese club is based in Lubumbashi and plays their games in the Stade TP Mazembe located along with the Kalamondo suburbs. TP Mazembe has annual revenue of €14 million. The attendance is 18,000.

Al-Merrikh is one of the oldest clubs in the whole of Africa. They are an Omdurman-based Sudanese football club that plays at Al-Merrikh Stadium – locally popular as the Red Castle. Al-Merrikh was founded in 1908 and was the first club to win the Sudan football championship back in 1934 and has also gone further to win the Sudan Premier League 18 times.

Esperance de Tunis is a Tunis-based football club that was founded in January 1919. They play at the Stade Olympique d’El Menzah. Esperance has won the Tunisian League 26 times, the Tunisian Cup 14 times, and the Tunisian Super cup twice. They have also won two CAF Champions Leagues, two Arab Club Championship cups, and an Arab Super Cup.

Since the inception of the Premier Soccer League in 1996 Masandawana has won the league title a record eleven times, the  CAF Champions League in 2016, and were voted CAF Club Of The Year the very same year. They have also won the Nedbank Cup four times, and hold the joint record of three National Football League Championships and they are the only South African team to have competed in the FIFA Club World Cup.

Raja is an Arabic word for “hopefulness.” Raja was founded in 1949 and is currently the most well-known club outside Morocco. In 2000, it was ranked third by CAF’s top clubs of the past decade. Raja has won the Moroccan domestic title 10 times. They were the first African Club to participate in the FIFA World Club Championships in 2000 in Brazil.

This is another Sudanese football club. It was founded in February 1930 and is based in Omdurman. They have won the Sudan Premier League seven times in the last 9 seasons alone and have been crowned champions of the competition 27 times in total.

El Zamalek is an Egyptian football club based in Giza. They have won 22 Egyptian Cups, 11 League titles, 5 CAF Champions League titles, and 3 CAF Super Cups as well as an African Cup Winners Cup.