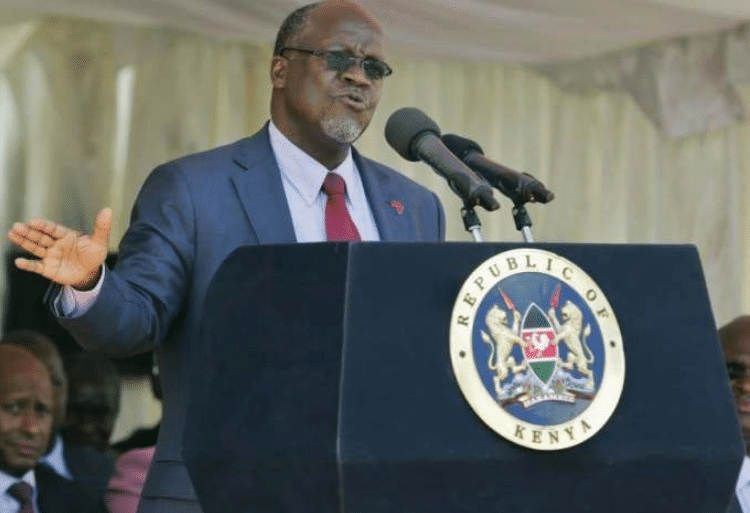 According to the Vice-President, Magufuli had died of heart complications.

Hassan said that Magufuli was hospitalised on March 6 at the Jakaya Kikwete Cardiac Institute.

The 61-year-old leader once nicknamed “the bulldozer” dies after weeks of speculation that he was infected with COVID-19.

Advertisement
Also Read: Biafra: Kanu And His IPOB Team Do Not Mean Well For Ndigbo – Coalition

Since the pandemic was declared in March 2020, Magufuli had downplayed the severity of the virus.

He made fun of the country’s coronavirus testing facilities, saying he had secretly sent samples of papaya and goat and that they came out positive.

“We Tanzanians have not locked ourselves down, and I don’t expect to announce even a single day that we are implementing a lockdown because our God is still alive, and he will continue protecting us Tanzanians,” the late president had told a crowd.

“But we shall also continue taking precautions, including steaming. You steam, at the same time pray to God, and going on with your daily activities so that you eat well and your body builds immunity against the coronavirus.”

Born on October 29, 1959, Magufuli earned his master’s and doctorate degrees from the University of Dar es Salaam in 1994 and 2009, respectively.

After a short stint of teaching at Sengerema Secondary School and later working as an industrial chemist, Magufuli went into politics under the ruling Chama Cha Mapinduzi (CCM) party.

He was elected a member of parliament in 1995 and that same year appointed deputy minister of works, receiving the title of minister in 2000.

In 2010, he gained popularity after he was appointed Tanzania’s minister for works and transportation for the second time.

He ran as president in 2015 and won 58% of the vote, defeating Edward Lowassa of the Chadema opposition party.

In 2020, he was re-elected — a win that opposition presidential candidate Tundu Lissu decried as fraudulent.