Nokia C3 is the newest member of the Nokia C-series smartphones. The smartphone was announced on August 4 and is expected to be released within the month. It is a budget smartphone and comes with some pretty cool features such. We will be looking at its specs and price in this article.

The Nokia C3 comes with a single rear camera and a single selfie camera which is not that great but considering the fact it’s a low budget device, am not surprise.

It comes with 8-megapixel f/2.0 camera which is supported with a LED Flash and HDR features and is capable to record 1080 videos at 30fps.

On the front, it comes with a 5-megapixel f/2.4 camera and its capable of recording 720p video at 30fps. 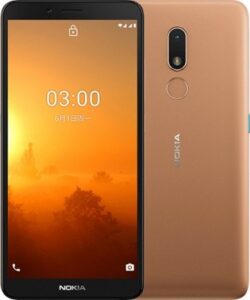 Nokia C3 comes with a pretty cool design, a glass front, plastic back and plastic frame design. It will be coming in two different colours which consist of Nordic blue and Sand gold.

On the rear panel, it houses a single rear camera, accompanied with a LED flash and a fingerprint. We also have the Nokia branding which indicates it’s a Nokia smartphone.

The Nokia C3 is powered with Unisoc SC9863A chipset, accompanied with an octa-core processor and IMG8322 graphics.

On the storage, it comes with 3GB RAM and 32GB internal storage. It also has memory expansion slot via microSD card. On the software, it runs Android 10 version of operating system.

On the battery, it is powered with Removable Li-Ion 3040 mAh battery, which promises to last long when fully charged.