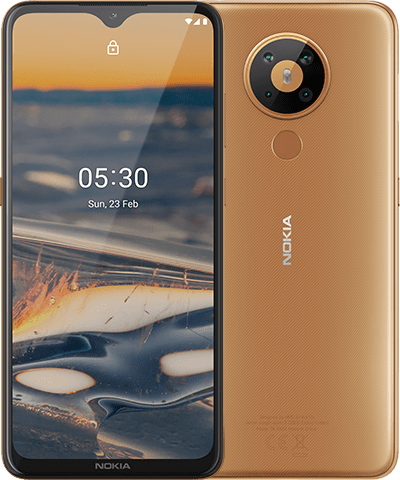 Nokia is known to be one of the best, if not the best in the phone market. With their range of phones known to be strong and durable, your amazing Nokia Company is back with a big bang as they unveil their new Nokia 5.3. You will get to know the full specifications of this device.

The Nokia 5.3 comes with a quad main camera setup. The first being the 13mp lens which is known to be the main camera, the 5MP used for ultra wide shots and then the double 2MP lenses used for macro and depth shots respectively.

On the front camera, it spots an 8MP camera which is capable of producing amazing selfies and it is also use for video calling.

The Nokia 5.3 spots an impressive IPS LCD capacitive touchscreen which is able to produce 16million colors. With its 6.55-inches screen making it perfect for watching movies. The screen is being protected with Corning Gorilla Glass 3 with a 720 x 1600 pixel resolution.

It houses a quad camera which is mounted at the upward middle, with a rear mounted fingerprint and a Nokia branding which indicates it is a Nokia smartphone.

Nokia 5.3 features a Qualcomm SM6125 snapdragon 665 chipset and an Octa-core processor which has a clocking speed of 2.0GHz and Adreno 610 GPU for graphics.

Going to the internal memory, it comes in three different types which is 64GB (ROM) + 3GB(RAM), 64GB(ROM) + 4GB (RAM) and 64GB (ROM) + 6GB (RAM) with the possibility of expanding its internal memory via a microSD-card which already has its dedicated Slot.

On the software, it runs Android 10 version of operating system, you will be delighted to know that users will be able to get Android 11 and Android 12 update on their phone.

The device is powered with an impressive 4000mAh non-removable battery which promises to last up to two days when fully charged.