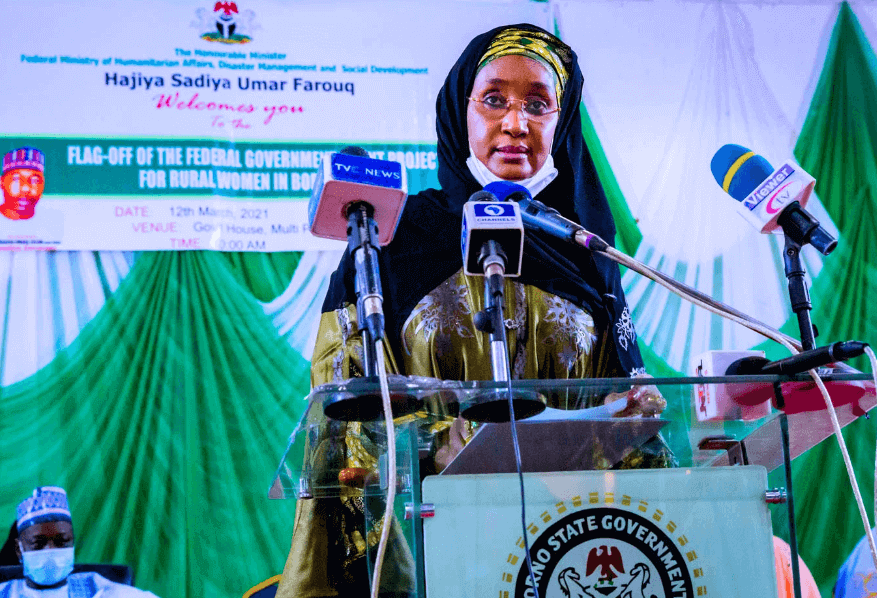 The Federal Government has officially flagged off its National rural cash and the digitized payment system for the conditional cash transfer Programme.
At the ceremony which took place in Osogbo, the capital of Osun State, the Minister of Humanitarian Affairs, Disaster Management and Social Development, Hajia Sadiya Umaru Farouk announced that over 12 million households have benefited from the National Social Insurance Programme, NSIP.
Represented by the Permanent Secretary in the Ministry, Dr Nazir Sanni Gwarzo, the Minister said of the over 12 million beneficiaries within the last five years, over 131,000 were from Osun State.

Hajia Umaru Farouk who described the NSIP as the largest social Intervention programme in Africa, costing the government a budgetary allocation of one billion dollars annually, announced that President Mohammadu Buhari had approved the expansion of the programme to lift more Nigerians out of poverty.
She added that the grant for the vulnerable group’s programme was introduced in the year 2020 to sustain the social inclusion agenda of the present administration, consistent with the national target of lifting 100 million Nigerians out of poverty in 10 years. “
The Minister further remarked that the programme was designed to provide a one-off grant to some of the poorest and most vulnerable Nigerians in rural and peri-urban areas of the country under which a grant of 20,000 naira would be disbursed to the poor and vulnerable category across the 36 States of the federation and the FCT where 3,040 residents of Osun State would benefit.
“70% of the total number of beneficiaries is for women while the remaining 30% is for the youths. In addition, about 15% of the total number of beneficiaries is specifically allocated to the segment of the population with special needs, including Persons with Disability (PWDs) and senior citizens in the State.”
She said the programme also included the on-boarding and training of 80 Independent monitors for the second batch of the NSIP in Osun State.
Declaring the programme open, the Governor of Osun State, Mr Adegboyega Oyetola commended the Federal government social Intervention programme which he described as a major step to reducing poverty among the people.
Mr Oyetola advised the beneficiaries to make use of the 20,000 grant judiciously.
“You will agree with me that every big business that you see today started small. So, it is not an acceptable excuse to describe 20,000 naira as too little to start a business”
The Governor maintained that since he came on board in 2018, his administration had been implementing many social Intervention programmes including “school feeding for pupils, food support for 30 thousand household monthly, taking of 10,000 youth off the street with productive service to the State, special quarterly grant transfer to 15,000 aged people and people with disabilities and Health Insurance scheme for the poor among others.”
Some of the beneficiaries including madam Monsurat Adegoke and Ruth Omodele said the grant would serve as take-off capital for their fruit selling business.

NEXIT CBN Loan – How To Get CBN Loan Without Collateral