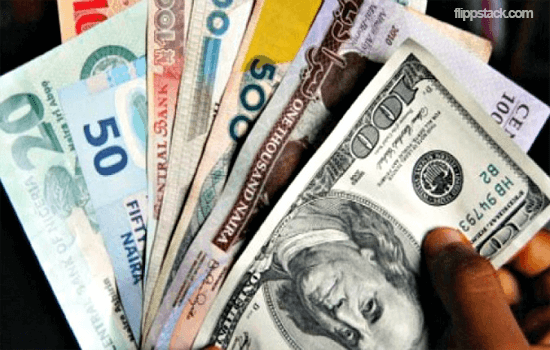 Flippstack reports that the exchange rate between the naira and the US dollar closed at N419.25/$1 at the official Investors and Exporters (I&E) window, representing a 0.18% depreciation on Wednesday, 18th May 2022.

Naira retracted its initial gain recorded in the previous trading session as the exchange rate between the naira and the US dollar depreciated by 0.18% to close at N419.25/$1 compared to N418.5 recorded on Tuesday. Meanwhile, FX supply surged by 95.55% to $201.34 million.

Similarly, the exchange rate against the US dollar depreciated by 0.33% on Thursday morning at the peer-to-peer market, trading at a minimum of N605/$1 compared to N603/$1 recorded as of the same time the previous day.

Meanwhile, the exchange rate at the parallel market remained stable at N590 to a dollar. This is according to information obtained from BDCs operating in Nigeria.

The decline in the external reserve level can be attributed to the continuous intervention by the Central Bank in the FX market in order to ensure the stability of the local currency.

While at the official NAFEX Window

A total of $201.34 million in FX value exchanged hands at the official Investors and Exporters window on Wednesday.

Latest on the Crypto market

The crypto market closed trading activities on Wednesday on a bearish note as the flagship asset and most capitalized cryptocurrency lost 380 basis points to close at $29,269, triggering a 4.51% downturn in the overall crypto market capitalization.

Meanwhile, the new SEC crypto and digital asset regulation have drawn several reactions, both positive and negative remarks from crypto enthusiasts across the country and outside the shores of the country. Some of these players in the digital asset space have commended the SEC for a first step while some analysts believe the regulation has some sore points in the draft.