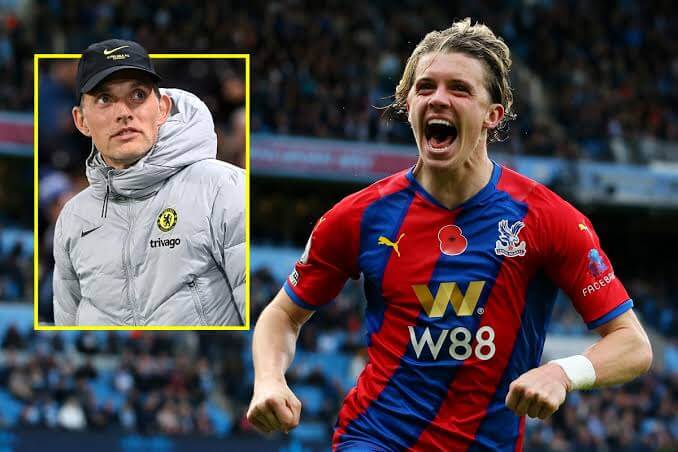 Chelsea boss, Thomas Tuchel has apologised to his Crystal Palace loaner, Conor Gallagher after denying him a chance to face his parent club in the Fa-Cup Semi-Final clash at Wembley this Saturday.

The Chelsea 22-year-old midfielder is enjoying a great season on loan in south London where has managed eight goals and five assists to his name and it is no surprise Crystal Palace asked permission to keep him in their side for the game.

However, Tuchel made it clear that they knew when the loan was agreed that this would be the case should this situation arise, although he appreciates why Palace and Gallagher are not happy and stated he apologized to Gallagher.

‘I had the chance to speak to Conor and I could also see his frustration,’ Tuchel revealed.

‘We met some weeks ago, after the international break. We ran into each other by coincidence in a restaurant and we had a chat. The subject came up and I apologised because I know how competitive he is and I like him a lot. I know his character very well. It was a pleasure to have him here in pre-season.

‘That’s the way it is. We play to win the game and the rules were clear when we made the loan. I can totally understand Patrick Vieira and also the disappointment of Conor of course, but these were the rules when we did the loan and we don’t want to suffer from our rules.’

How Chelsea and Crystal Palace Might Lineup at Wembley

Following the return of Romelu Lukaku from injury, he is probably going to start for Chelsea, looking at his the most rested players among the attacking options.

While Crystal Palace on the other hand will have to deal with the absence of Conor Gallagher in the middle.