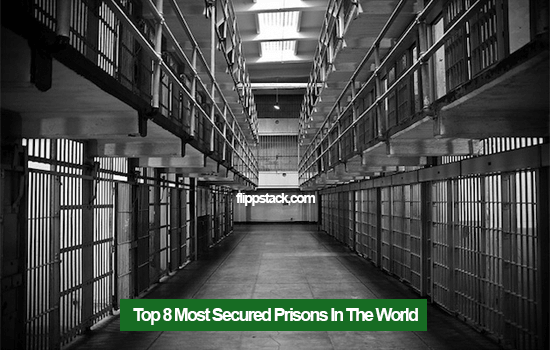 Top 8 Most Secured Prisons In The World

Prisons have always been a place where criminals are kept as a punishment for their crimes. Prisons around the world differ in size and security-wise depending on the type of criminals they house.

However, in this day and age, bars and guards aren’t enough, and prison security measures today are as advanced. Prisons are now doubled up in terms of security guards and materials used in building them.

In some prisons, prisoners hardly get to see the sun and some prisons are even built in the center of a big sea which makes it difficult for prisoners to escape.

Top 8 Most Secured Prisons In The World

It is perhaps the most secure prison the world has ever seen. We’re talking about a maximum lock-down jail where it is said that prisoners are lucky if they ever get to see the sun.

ADX Florence opened in 1994, with a cell that has no direct access, prisoners are locked up the whole day, without any measure that could possibly help them get out.

La Santé Prison is a prison operated by the French Prison Service of the Ministry of Justice located in the east of the Montparnasse district of the 14th arrondissement in Paris.

It is Built-in in 1867, in the very heart of the national capital, Paris, France’s La Santé Prison is one of the most famous prisons in the world. La Santé is notoriously known for being the prison that once you go to, you’re not going to come out of till you come out.

Despite its location in the heart of the city, the prison’s architecture and security measures are so simple and effective that it is impossible to get out. a couple of years, many prisoners have tried to escape the hard way, when what they thought was a way out of prison – a sewage pipe – was locked down too, and almost suffocated to death.

Arthur Road Jail is Mumbai’s largest and oldest central prison. It was built-in 1926, the facility that was originally designed to house 1000 prisoners is home to over 2000 inmates at the moment.

But apart from the run-down prison conditions and obvious human rights infringement speculation, no prisoner has ever been known to break out, and no outsider has ever been able to break in. The prison spanning over 2 acres was built to be an impenetrable fortress. And it stands to date true to its nature.

Alcatraz Federal Penitentiary is one of the most famous prisons on the planet, Alcatraz has housed prisoners like Al Capone, Whitey Bulger, and Rafael Miranda. Located on an island 2 kilometers off the shore of San Francisco, only 5 of the 14 prison escape attempts ever made were unaccounted for – who was presumed to be dead.

Alcatraz shut down in 1968, but still holds the reputation of being one of the toughest prisons to break out of. You know, swimming’s never been a convict’s forte.

Qincheng Prison is located in China at 3000 feet above sea level, deep inside a desolate valley in the Changping District of Beijing lies a facility with over 5000 security personnel guarding the most notorious prisoners of the country.

Qincheng was built with aid from the Soviet Union in 1958 and was originally used in the detainment of Kuomintang war criminals. The prison boasts of the tallest watchtower in the world, looking over a facility that is surrounded by valleys on all sides. This sounds scary, right?

From the simplest and oldest prisons, let’s move on to one of the most advanced security measures prisons have ever taken. Few details are known about the Fuchu Prison in the western region of Tokyo, which has also played host to World War II prisoners in the past.

Home to some of the most notorious criminals in Japan, the Fuchu prison has a perfect track record of no escaped prisoners. Well, none yet. There are more advanced security measures here than you can imagine, and Japan doesn’t want anyone to know.

The prison facility at Camp Delta, Guantanamo Bay, Cuba, is one that requires no introduction. Part of the base operated by the American armed forces, it is a detainment facility that houses criminals that are considered of the highest priority by the US.

We’re talking about the place where Al Qaeda suspects were imprisoned and tortured. Up to 12 guards could be assigned to constantly watch over a single prisoner. In fact, let’s say you even sneak out of there, you’d step into the middle of a military base. Good luck with that.

Built by the French Mandate forces in the early 20th century as a military barracks, Tadmor Military Prison in Syria is now known as one of the hardest prisons to survive in, thanks to its insane human rights violations and abysmal living conditions.

As far as breaking out goes, the facility is in the middle of a desert some 200 kilometers northeast of the Syrian capital, Damascus. On top of which the only way to get in or out of the prison is one tunnel that you would have to crawl. Which, of course, is highly secure.

There are other secured prisons around the world but these eight mentioned above are the most secured which means no prisoner is getting out of these prisons. Not until one way or the other their time is up!