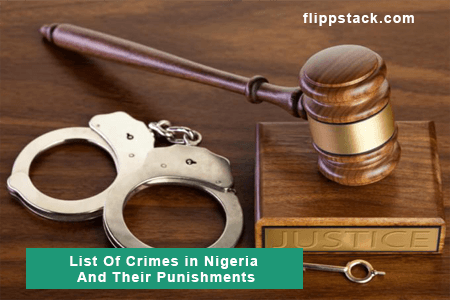 As we all know crime is inevitable in any country or society, that’s why all countries always set regulations in place to prevent people from doing these crimes and to penalize them as we will be walking you through the list of punishable crimes and offenses in Nigeria according to the criminal act or better still, the constitution of Nigeria.

In Nigeria, certain crimes are more prevalent than others, although all these crimes are punishable by law, the process of getting a judgment for these criminal offenses seems lengthy, hence the delay in justice or meeting out punishment to erring individuals.

Below is the full list of the punishable crimes in Nigeria

Full List Of Crimes in Nigeria And Their Punishments

The comprehensive list of the punishable crimes and offenses in Nigeria include the following:

The first on our list is rape. Rape involves engaging in sexual activity with somebody against her will, particularly with violence, which is referred to as rape.

According to research Males are responsible for about 90% of predatory sex against females. Rape symbolizes, to some extent, Nigerians’ ambivalence, moral degradation, ethical insolvency, materialism, depraved conscience, pervasive immorality, and deceit over the years.

Penalty: Rape is punishable by life in prison or a lesser sentence, as well as a monetary fine.

Terrorism is another punishable crime in Nigeria which refers to the act of instilling fear and harm in the public with the goal of intimidating them, usually utilizing religion, politics, or money as the bolstering notion.

Penalty: In Nigeria, terrorism is punishable by life imprisonment or, if death is implicated, the death sentence.

Cybercrime is one of the most popular crimes not only in Nigeria but in the world. It is the use of a computer or numerous different digitized devices to commit a crime. Cybercafes must register with the EFCC in order for the agency to monitor their operations and impose operational rules that prevent internet fraud.

This is a type of crime that damages the economy of the country and it comes in a variety of forms. There are a lot of these kinds of crimes. Tax evasion, pipeline vandalism, and a slew of other issues.

Penalty: Seven years in prison, with or without a fine

A financial crime is an offense that happens to involve the unauthorized use of money or financial products such as cheques, drafts, money orders, etc. For instance, bank fraud, the issue of forged checks, and so on.

Penalty: fourteen years in prison or a fine, or both.

This is one of the most trickish crimes, it involves deceiving a person into making an upfront payment on a proposed business deal, romance, marriage, contract, or other transaction.

Penalty: A financial crime is punishable by fourteen years in prison, a fine, or both.

This is now common, especially to financial institutions. It involves the illegal transfer of funds out of Nigeria. Money that hasn’t been disclosed to the authorities and is typically obtained through unlawful ways in order to transform it into legal tender.

Penalty: Money laundering carries a sentence of seven to fourteen years in prison and a fine.

The Nigerian police force’s heinous brutality and hostility make people question the need for survival techniques in this no-man’s-land. Regarding police brutality, the public has no established defense. To protect themselves, police shoot unarmed individuals and place tags on armed robbers. Defenseless Nigerians have been punished for crimes they did not commit.

Penalty: Three years in prison is the penalty for police brutality.

Bribery is the exercise of giving something, especially money, in exchange for a clandestine advantage, while corruption is the abuse of a stance of credibility in an attempt to gain an unfair advantage.

Penalty: Bribery and corruption are punishable by three years in prison.

This remains one of the most common and dangerous crimes in Nigeria. It is becoming even more so.

Penalty: Robbery is punishable by seven years in jail, with or without a fine. The additional counts would indeed be charged individually in cases of violent offenses.

During or after a religious crisis, any crimes committed would be made to pay as being such. If a religious catastrophe or violence occurs, for instance, culprits would be accountable for murder, arson, rape, and theft, and would also be prosecuted and appropriately punished.

Punishment for complicity is the same as for the directly responsible crime.

Penalty: A maximum of six months in prison, with or without a fine, is the penalty for criminal conspiracy.

Slander is simply an untrue spoken statement about someone which is intended to damage their reputation.

Penalty: penalty for slander and libel is three years in prison a fine, or even both.

The following are the penalties for misappropriation of funds: Sentencing ranges from seven to fourteen years in prison, including a monetary fine.

This is common in Nigeria, especially during elections and it is the highest possible fine of ₦50,000,000 or imprisonment for a period of not less than ten years, or both is the penalty for snatching a ballot box.

Penalty: Forgery is punishable by seven years in prison, with or without a fine.

Physical assault is punishable by a life sentence or a lesser sentence, with or without the option of a fine.

Hate speech simply means abusive or threatening speech or writing that expresses prejudice against a particular group, especially on the basis of race, religion, or sexual orientation.

Penalty: A year in prison is the penalty for hate speech/public incitement.

Note: There are other offenses that are widespread in Nigeria, all of which are punishable under the law. You should take care to understand these laws and what it means to break them in order to avoid being fined. Even though, as they say, ignorance of the law isn’t a justification before the law, this information will assist you in becoming aware of these offenses. If you believe you have been wrongfully charged, it is critical that you hire a lawyer to represent you.