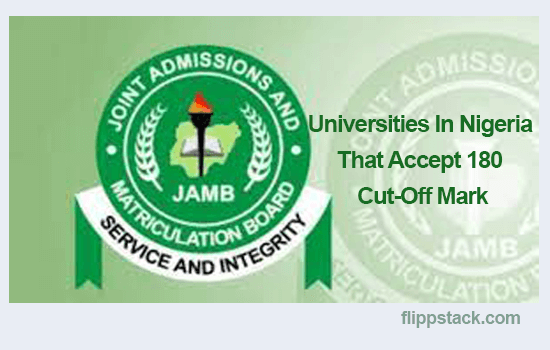 If you are among those that scored 180 in their JAMB and you are looking for Universities that accept 180 as a cut-off mark, then you are at the right place as we will be walking you through the list of Universities In Nigeria That Accept 180 Cut-Off Mark in JAMB.

If you scored 180 in the last concluded UTME conducted by JAMB and you are wondering if there is any University that accepts 180 as a cut-off mark, the good news is that there are many Universities that accept 180 as cut-off mark but you need to perform extremely well in the school’s POST-UTME in order to increase their chances of admission.

So JAMB score is not an automatic ticket to gain admission, all you need to do is to work hard so you can get a high score in the school’s POST-UTME.

This is also among the universities that Jonathan’s administration established in 2011. Candidates who reach 180 in UTME will be considered for admission into this university.

FUTO is a federal university popularly known to be science inclined. Some departments in FUTO accept 180 as their JAMB cut-off mark while professional courses go as high as 250. You can check FUTO’s official website to learn more.

EBSU is one of the state universities in Nigeria that accepts 180 as a JAMB cut-off. So, if you scored up to 180, you might be lucky to get admission into this university.

This is one of the institutions established by Goodluck Jonathan’s government in 2011. This University creates and impart knowledge through student-centered approach learning.

This university also accepts candidates who scored up to 180 in UTME. And it has admitted over 10,000 undergraduates since its inception in 2011.

If you write JAMB and scored 180, TAI Solarin University of Education is one of the universities that will accept you. TASUED has been amongst the most preferred institution for UTME candidates.

If you choose this university as your first or second choice and you score 180 in UTME, you might be lucky to get admission into the school.

This University is a federal university, and it always accepted students who scored 180 in UTME.

RSUST is among the universities in Nigeria that accept 180 as JAMB cut-off mark for its candidates. As long as you meet the requirements of the institution, you would be qualified to sit for POST UTME.

DELSU is a top state university in Nigeria. It accepts candidates who scored 180 to 200 sit for its POST- UTME.

ABSU is another state-owned university in Nigeria with accredited courses. In a bid to facilitate admissions and bring professional skills, lecturing expertise backed up with modern research facilities to aid students to obtain higher education, the school has admitted students who scored 180 or more in JAMB.

KASU is located in Kogi state and offers postgraduate, undergraduate, pre-degree, and even part-time courses and programmes.

This university is in Edo State, it accepts candidates who scored 180 in UTME. But be informed that this institution is strict in its minimum age requirement which is set at 16 years. If you are not up to 16 years they might not admit you.

The University of Calabar is one of Nigeria’s second-generation federal universities. The campus has also been the preferred choice for candidates looking for universities that accept 180 in JAMB 2020.

The JAMB cut-off for this institution is 200, but some department admits those who scored 180 in UTME. Go to the ABSU official website for more information.

MOUAU applicants seeking admission into the first-year 100 semesters of any degree course in this university have to be qualified through meeting the requirements before they apply for Admission.

This is another state university that accepts 180 in JAMB 2020. Although it varies depending on the course you choose during your UTME.

This school is located in the north and they offer quality education to their students. They also accept the same cut-off marks apart from professional courses.

This is one of the top-notch universities in Nigeria that accept 180 in UTME as a cut-off mark.

IMSU is another Nigerian university that accepts 180 in the JAMB exam. If you put this tertiary institution as your school of choice, you can also get admission but they use a quota system a lot here.

UNIUYO is also listed among universities that accept candidates who scored below 200 in their JAMB exams.

KASU accepts candidates who score less than 200 in the JAMB exam. You can check the institution’s official website for more details.

ESUT is one of the notable universities in Nigeria that accept 180 and above as a JAMB cut-off. If you score 180 in UTME, you have chances to gain admission into the university.

The list above are universities in Nigeria that accept 180 in the JAMB 2020 examination. Other institutions like the University of Nigeria (UNN), Nnamdi Azikiwe University (UNIZIK), Obafemi Awolowo University (OAU), University of Lagos (UNILAG) normally set their cut off from 200 upwards and use 250 for their professional courses.

Full List Of Nigeria Police Academies And Their Locations