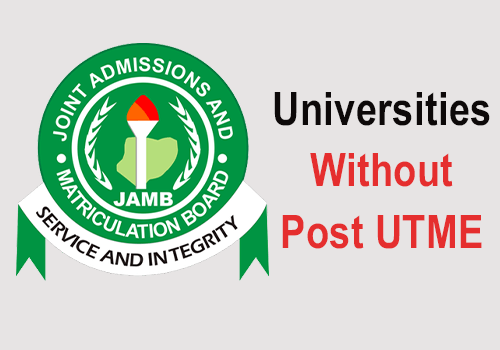 Welcome to Flippstack, In this article, we will be walking you through a list of Universities that do not write Post UTME to gain admission, so make sure you read until the end.

Some universities do not write post UTMEs for their candidates rather, all they want is your O’level results. Instead of the post UTME, they prefer physical and/or online screening for credentials. Hence, if you’re afraid of writing other exams after UTME before you’re offered admission; I suggest you consider any of the universities below.

The university was not used to writing post UTME for their aspirants. But in 2018 they tried it. The first batch of their applicants was tested on computer-based exams from which their first batch admission list was based.

However, because of the technical itches and the continual allowing new applicants to do a change of institution to them, they had to stop exams. Hence, for their second and third batch post UTMEs, they were admitted based on aspirants’ O’levels and UTME scores.

It may be safe to say that aspirants should still be on the lookout for the same scenario we witnessed in 2018.

In the meantime, here is the EKSU post UTME page where you should be checking any updates.

This university has both degree and NCE programmes. And for their NCE and degree applicants, they don’t conduct post UTME.

When their post UTME form is out, you’re to fill the form online while submitting details of your SSCE Results and UTME score. A few days later or immediately after submission, your total Post UTME score will be available for you to print. This score will be calculated based on points grading system designed by the management on the UTME score and O’level subjects grade from 5 relevant subjects with your proposed course.

However, they didn’t make the grading system public. Hence, you may not know how they do their calculation.

History has it that the university/college of education was used to conduct post UTME entrance exams until recently (until 2017 to be precise). Hence, aspirants should be on the lookout for any possible return to the old way.

The university doesn’t conduct post UTME tests for the aspirants. Instead, they use a grading system. I explained that concisely here. And the grading system/calculation is detailed on the dedicated LASU post UTME updates page.

For the past few years, what guaranteed your admission into the university include the O’level grades, UTME score, rate of competition for the course proposed, and most recently indigeneship of Lagos State.

This is one of the universities that ditched writing post UTME earlier than others. They don’t conduct post UTME for their aspirants as admissions are offered based on O’level results, UTME score, and available spaces in the departments.

After the online registration, candidates are to wait for the management to release their screening results. It’s based on this and departmental quotas, you’ll be offered admission.

– filling their O’level grades and UTME score. The university then releases admission lists through JAMB CAPS.

We are yet to know how the university grades its aspirants for admissions. However, the Federal admission spaces sharing formula and ratio of science to art in the lists still apply.

The northern university is well known for screening rather than a standardized computer test for their UTME/DE applicants. You’re not to write entrance exams before you can be offered admission. Just like their counterparts above, you’re graded based on your O’level results, UTME score, and competition for the proposed course.

As a norm, a majority of northern universities and especially being federal take catchment areas and admission ratio seriously. This, however, doesn’t mean you won’t be offered admission if you’re an outsider.

The university situated in Ilorin, Kwara State is found of admitting aspirants based on their O’level results and performance in UTME. If you’d chosen them or you’re just considering a change of institution to the university, prepare yourself for the online registration and invitation for physical checking of your credentials – SSCE result, UTME result, Local Government Identification, and Birth Certificate. If satisfactory, you’re to be in the class this session.

And for your information, this is one of the universities that sell their post UTMEs so earlier that a majority of aspirants may miss out. To avoid being a victim, check their Post UTME updates page to see if this year’s admission can still favour you.

The federal university is one of the universities, if not the only one (in the southwest) earlier to adopt screening only method for their aspirants.

You should expect the school to announce the cut-off mark for all or each of her courses first. After that, you’re to participate in the online screening exercise which involves filling out your SSCE results grade, UTME score, and bio-data.

this, you should be able to see your total score immediately or in a few days. It’s based on this aggregate score that the university will decide your admission fate. If you meet or beat the departmental cut-off mark (as will be drawn after the screening), welcome to the campus.

For some of these universities, you will see your screening result immediately after online registration and uploading e.g LASU. Some at a later time e.g FUOYE, UNIOSUN. For some, you have to wait for your fate in the Admission list e.g ATBU, UNIMAID. But generally being offered admission will be based on your performance (point as per O’level relevant subjects) and UTME score.

Any of these universities may not be the best chase for you if you have weak grades in your SSCE results and/or lower marks in UTME.

Fuel Scarcity: How to Survive The Heat in Nigeria