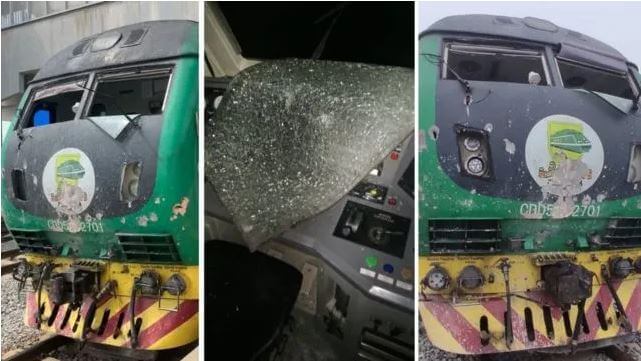 BREAKING: Terrorists Bomb Abuja-Kaduna Train With 970 Passengers On Board

Flippstack reports that terrorists detonated a bomb on the rail track of the Abuja-Kaduna train and successfully immobilized it at a point between Katari and Rijana.

This online news platform understands that the said train the terrorists attacked, was heading to Kaduna, northern Nigeria from Abuja, the nation’s capital on Monday, March 28, 2022.

Confirming that attack, a passenger by the name of Anas Iro Danmusa, took to the social media network, Facebook to give an update on the situation report.

The Abuja-Kaduna train passenger wrote on Facebook: “Please this is an emergency. We are on the train at the moment. Kidnappers planted explosives and the train engines have been ruined. We are helpless. Abuja to Kaduna train. Gunshots are still being fired right around us. We are just under the seats praying to God while waiting for help. Since 8 pm we have been here. Btw Katari to Rijana. I am a living witness.

“There is a bad network where we are at the moment. It is just luck that I am able to type this. They are actually trying to force themselves inside the train…no help yet. Over 1 hour.

“Alhamdulillah! The army is with us. We are safe!!!”


Also confirming the attack on the Abuja-Kaduna train, Shehu Sani, a former Kaduna Central Senator, said villagers around the area claim the train is under attack.

“Villagers along Abuja-Kaduna road called to confirm hearing multiple gunshots and attack on the Abuja-Kaduna train by terrorists,” he wrote on the micro-blogging site, Twitter.