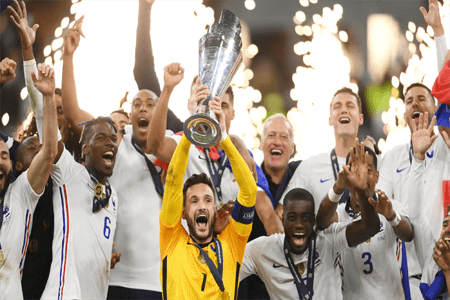 France bounces back from 1 goal down to see off the threat of Spain to capture their first UEFA Nations League title at the San Siro Stadium in Italy.

Spain took the lead first from the Oyarzabal strike but goals from Karim Benzema and Kylian Mbappe were enough to see off a dangerous Spanish side in the final of the UEFA Nations League.

It was a great game of football as the French team pulled off the same performance they did against the Belgium side which saw them came back from two goals down to win 3-2 to book a final with Spain.

France goalkeeper, Hugo Lloris made two very important late saves to make sure they would defeat the Spanish team and lift the trophy for the first time.

Related Topics:UEFA Nations League
Up Next