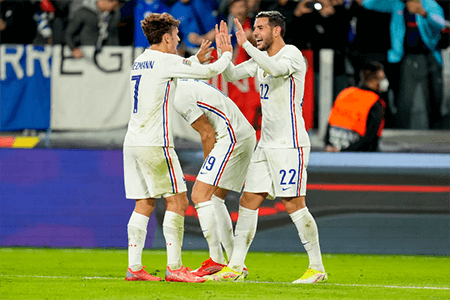 France Fought From Behind To Seal UEFA Nations League Final

France has sealed a place in the UEFA Nations League final after coming from two goals down against Belgium in the Semi-final, thanks to Hernadez’s last-minute strike to complete the comeback.

It was a game of two halves as Belgium ended the first half with a two goals lead but France came back the second hand with a  change of plan that worked perfectly to seal them turn the goals around.

Carrasco gave Belgium the lead in the 37mins, Lukaku doubles the lead immediately in the 40th minute to end the first half, but France showed tremendous spirit to come back into the game. Benzema gave them a fighting chance when he converted Mbappe’s cross before the Real Madrid man scored a penalty after Tielemans brought down Griezmann. Lukaku had a goal disallowed for offside in the final few moments, while Pogba hit the crossbar, but there was still time for a winner. Theo Hernandez, of all people, charged forward for a counter-attack, and he smashed the ball into the far corner to beat Courtois.

What a chance missed by Belgium to book a place in the final with Spain on Sunday at the Juventus Stadium, it will definitely take them time to bounce back from this result.

France Fought From Behind To Seal UEFA Nations League Final

Related Topics:UEFA Nations League
Up Next