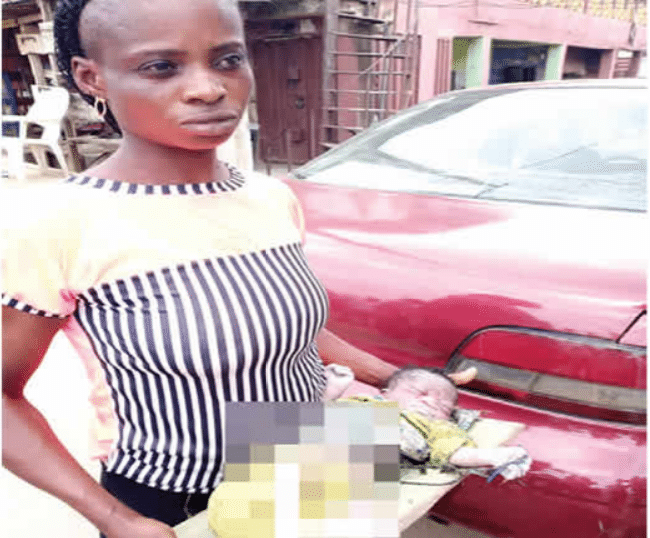 The Ogun State Command of the Nigeria Police Force has confirmed the arrest of one Sukurat Olajoke who allegedly murdered her own biological child.

The suspect according to a statement by the State Police Public Relations Officer, DSP Abimbola Oyeyemi, killed her own month-old baby and dumped his corpse inside a river.

The PPRO confirmed that Olajoke was arrested by officers attached to the Enugada Divisional Headquarters, Abeokuta, who were on a routine patrol with the Divisional Police Officer, SP Baba Hamzat. Naija News understands that men of the police force went after the accused after sighting her from afar throwing something suspiciously into a river.

When apprehended, Olajoke confessed to the police that she committed the crime out of frustration following the rejection of the child by the supposed father.

We understands that the woman was nabbed after throwing the remainder of the baby into the Ogun River at Lafenwa, Abeokuta. Giving more details of the incident, Oyeyemi in a statement on Sunday, March: “It was during interrogation that the suspect, who lives at Agboole Alakoye area of Igbo Ora in Oyo State, confessed that what she threw into the river was the corpse of her one-month-old baby, whom she killed out of frustration.

“She confessed further that the person, who was responsible for the pregnancy, rejected her and the baby, and since she had no means of taking care of the baby girl, she decided to kill and throw her into the river.

“Preliminary investigation revealed that the suspect had given birth to six other children for three different men before she became pregnant for one man simply identified as Hakeem, who denied the paternity of the child.

“The DPO later engaged the services of local divers, who helped in recovering the corpse of the child, and it has been deposited in the general hospital mortuary.”

On his part, while reacting to Olajoke’s crime, the state Commissioner of Police, Edward Ajogun, ordered the immediate transfer of the suspect to the Homicide Section of the state Criminal Investigation and Intelligence Department for further investigation and prosecution.

Meanwhile, unknown attackers have stabbed to death the wife of a pastor of the Lord’s Chosen Church, Mrs Eunice Omaye Odoba, in Otukpo town, Benue State.
It was gathered that the cleric’s wife was stabbed in the chest on Sunday morning. It was learnt that some members of the church who were worried about her not been in the church went to check on her, only to discover her lifeless body.