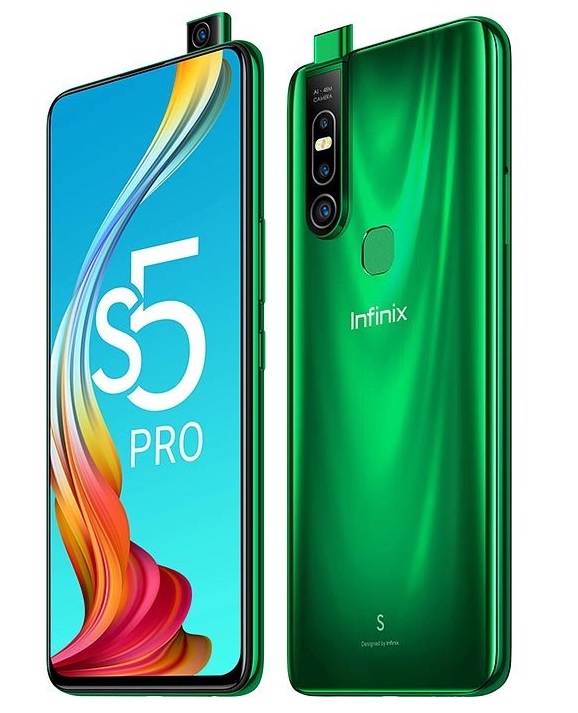 Infinix S5 Pro is the newest member of Infinix S series, it is an upgrade to the Infinix S5 that was launched last year. It comes with an improved features such as a pop-up selfie camera, design, processor and many more. Will be looking at the price and specs of the Infinix S5 Pro in this article, for your purchase decision.

The Infinix S5 Pro comes with an improved camera sensors compare to that of the Infinix S5. It features a triple rear-camera setup which includes a 48MP main camera which has an aperture of f/1.8, a 2MP depth camera and a QVGA low light sensor. This rear camera setup offers HDR and panorama feature and can shoot 1080p videos at 30fps.

It features a 16MP motorized popup selfie camera which has an aperture of f/2.0, supports HDR feature and can also shoot 1080p videos at 30fps. 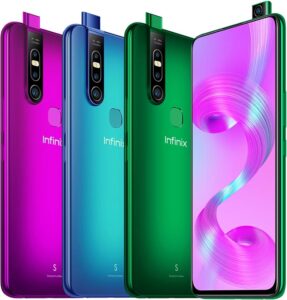 The Infinix S5 Pro has similar design to that of Tecno Camon 15 Pro, S5 Pro was actually designed to match the Tecno Camon 15 pro. Both has the same glass front, plastic back and pop-up camera design.

The device will come in three different colours which include Forest Green, Sea Blue and Violet.

The Infinix S5 Pro X660B is powered with an Octa-core Cortex A53 processor, MediaTek Helio P35 chipset and PowerVR GE8320 graphics which will be great for gaming and multimedia functionalities.

On the storage, it comes with 4GB RAM and 128GB internal storage and has an option for storage expansion via Micro-SD upto 256GB.

Infinix S5 Pro runs Android 10 (Q) version of operating system which is supported with the infinix’s XOS user interface. It will be interesting to know that this is the first Infinix phone to run the Android 10 version of OS.

The Infinix S5 Pro comes with 4G LTE connectivity. It also comes with a 3.5mm headphone jack, Bluetooth 5.0 and a Micro-USB port (USB 2.0).

It is powered with Non-removable Li-Po 4000 mAh battery which promises to last long when fully charged.

The price of Infinix S5 Pro starts at N76,500 Naira in Nigeria, the price varies base on the vendor or your area.