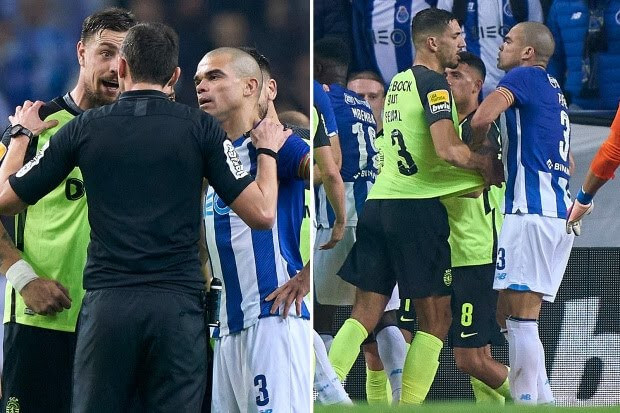 Ex-Real Madrid star and FC Porto centre back, Pepe could be banned for up to two years for physical assault after he kicked a Sporting Lisbon director during a brawl.

On Friday, 11th February, Porto’s clash with their Portuguese rivals Sporting ended in an ugly scenes as four players were sent off after the game following a furious squabble involving Pepe.

In the brawl that involved 40 men, Joao Palhinha, Bruno Tabata and Marchesin all joined the former Real Madrid defender in being dismissed after the game ended 2-2.

But it is Pepe who may end up with the most severe punishment as reports from Portuguese newspaper A Bola allege the report from referee Joao Pinheiro states that Pepe kicked a Sporting director .

The director in question has not been named in the report but according to article 145 of the Disciplinary Regulation of the League of Clubs, this is considered a ‘very serious disciplinary offence’ which can incur a ban ranging from two months to two years.

A lengthy ban could mean the end of Pepe’s career – given he turns 39 years of age later this month.