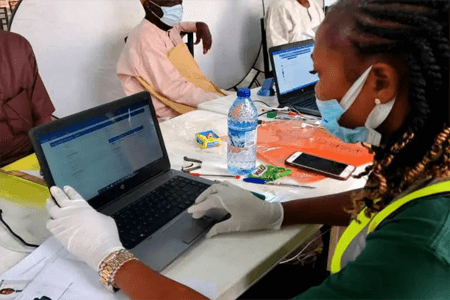 The Federal Government through the Pension Transitional Arrangement Directorate (PTAD) has kick-off another round of biometric verification exercises for 21,000 Federal Government pensioners who were not able to be verified during the exercise in the southwest region of the country in 2019 but were identified as bonafide pensioners.

Speaking to newsmen in Ibadan, the Executive Secretary of PTAD, Dr. Chioma Ejikeme, present at the biometric verification of pensioners who retired from the federal civil service, stated that the exercise was basically for Federal Government pensioners who were left out for one reason or the other in the 2019 exercise, held in the Southwest.

According to Dr. Chioma Ejikeme:

“So, a lot of them have been coming back and this was in October 2020. Then we moved about 21,000 pensioners who were not verified but were on the payroll. So they have been trickling back, saying they were bonafide pensioners; they were qualified and because of the numbers, we now decided to come back and do a mop-up verification.”

“We are asking all of them to avail themselves of this opportunity, to come and get verified because without that verification we won’t have a view on our database.”

She, however, said the agency has left no stone unturned to get rid of the activities which bedeviled the old pension regime.

“When PTAD was established, it inherited a myriad of problems that had bedeviled the old pension offices namely, the Police, the Civil Service, Customs, Immigration and Prisons (CIPPO), as well as the Boards of Trustees of Parastatals and Agencies, which were poorly managed and underfunded.”

“There was no formal database of pensioners’ records, there were incomplete payrolls and reported instances of ghost beneficiaries as well as allegations of pervasive fraud in the operations of the offices,” she said.

Some of the pensioners who spoke with Vanguard at the Law Hub, Ring Road, Ibadan, venue of the ongoing mop-up verification exercise, expressed happiness over what they called the ‘change agenda’ of the executive secretary of the organization.

“The system was notorious for fraud, no by government officials who engaged in the diversion, for personal use, the funds earmarked for pensioners.”

“The situation has changed following the measures and structures put in place by the PTAD management which has sanitized the system and restored hope to pensioners.”

“A lot of material and human resources have been deployed to make the agency deliver on its goal,” he added.

Another pensioner, Mr. Kunle Ajibade, who described the exercise as very smooth commended the management of PTAD for putting up a water-tight arrangement for the smooth conduct of the exercise.

Ojo, said: “The process is very nice and smooth. Once you have your whole documents, you have no problems, in a few minutes you are done.”

“The way they do it now is so nice because the exercise is well-coordinated and orderly. It is first come first served. I commend PTAD,” he said.