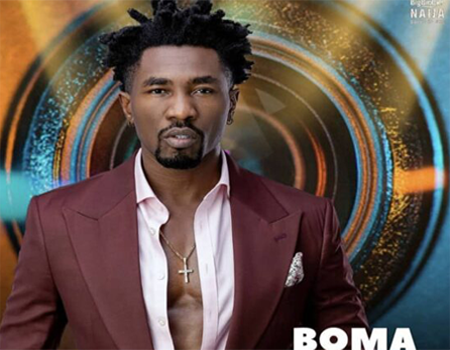 BBNaija 2021: Boma Slams Those Judging Him, Calls Them Hypocrites

The just evicted BBNaija shine ya eyes season 6 housemate, Boma, has come out to slam those criticizing him on his relationship with fellow married housemate Tega in the Big Brother house.

During an interview with Punch, Boma had said that those who were criticizing him were hypocrites that sleep with other people’s wives.

He also added that those on a movie set who were married with kids also kissed other people and he feels people were simply projecting their anger on him because they had a bad day.

According to his statement:

“Those actresses, are they not married with kids in their family? Don’t they kiss people on set? So, I feel people just want to be hypocrites.

“Even the people that are sleeping with other people’s wives are still talking.

“People were just projecting their anger. It’s like most people woke up and didn’t have a good day. With things practically rough with them, they wanted to take out their aggression or frustration on somebody.

“They all come on social media and start backlashing someone.”

“If you saw me in a hotel with somebody’s wife, call me out.

“If I went to somebody’s house and I was with their girl or their girl came to my house, then call me out. Don’t call me out on a show. It was just a show”

He had locked his Instagram page after leaving the house and had complained that he was receiving death threats from some people.

Boma had also apologized to Tega’s husband and family for his actions toward her while in the house.

You  may also want to read BBNAIJA: White Money Reveals Secrets On How To Become Successful in Business

BBNaija 2021: Boma Slams Those Judging Him, Calls Them Hypocrites