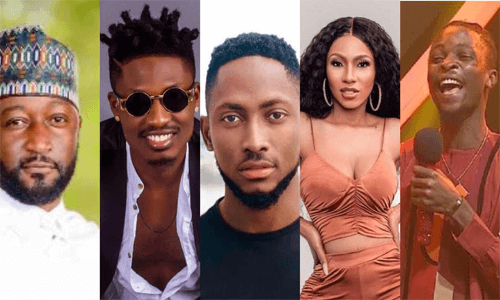 Welcome to Flippstack, in this article, we will be walking you through the full list of past winners of Big Brother Naija and their achievements so far ahead of this season’s Shine Ya Eye finale.

Flippstack understands that the Reality Show (Big Brother Naija) is a Nigerian reality competition TV Show, in which contestants live in an isolated house and compete for a large cash prize and other gifts at the end of the show by avoiding being evicted by viewers who vote for their favorite housemates. Formerly known as Big Brother Nigeria, the show is based on the Big Brother television franchise.

The show is usually being hosted by popular show hosts and OAPs, who captivate the viewers & housemates with their use of words, figures of speech, puns, and ‘table-shaking antics, to the excitements of viewers. Olisa Adibua and Michelle Dede were the hosts of the first edition while Charismatic media personality and BBNaija 2006 contestant Ebuka Obi-Uchendu has been the host since 2017 till date.

Since Inception, BBNaija has produced 5 winners who went home with cash & gift prizes, as well as endorsement. Some of them have gone on to become prominent people in their field of industry. As the Sixth edition of the show gradually coasts to an end, let’s have a throwback and take a look at past winners of Big Brother Naija, and what they currently do.

The first edition of the show saw scriptwriter Katung Aduwak from Kaduna emerge as the winner of the show. With a total of 51.3%, he defeated Francisca Owumi, Ifeoma “Ify” Ejikeme, and Sandra “Sandy” Osigbovo to cart home with the prize money of $100,000.

After the reality TV show, Aduwak proceeded to New York to further his education at the Digital Film Academy, graduating with a directorial degree and went into filmmaking. He is now into filmmaking, producing movies such as “Unwanted Guest” and “Heaven’s Hell.” He has also starred in EbonyLife TV’s “Desperate Housewives.” He is currently the CEO of One O Eight Media and an African Partner for Campfire Media.

Aduwak is married to Raven Taylor-Aduwak and they have a son. The Runner-up was Francisca Owumi and the event was hosted by Michelle Dede and Olisa Adibua.

Popularly known as Efe, the Delta State-born winner caught the eye of the audience with his all-around musical talents and his sanguine nature. Efe also endeared himself to Nigerians for identifying with the famous city of Warri despite living in Jos and tales of his humble beginnings. A graduate of the University of Jos, Plateau, Efe shocked the whole country when he defeated his rivals, garnering a total of 57.6%, a wide margin from Bisola’s 18.54% and T-Boss’s 13.60% of votes respectively. Debbie-Rise and Marvins who also both made it to the finals, could only both manage to get 8.78% and 1.47% of the total votes.

After the show, he was appointed as an Ambassador of entertainment and creative industry role in plateau and Youth Ambassador by the Nigeria Ministry of Youth and sport. In 2018 he became African Ambassador for Indian Varsity.

After the show, he was appointed as an Ambassador of entertainment and creative industry role in plateau and Youth Ambassador by the Nigeria Ministry of Youth and sport. In 2018 he became African Ambassador for Indian Varsity.

Big Brother Naija Season 3 was produced by South Africa’s Red Pepper Pictures and was launched on 28 January 2018. Pilot Miracle Ikechukwu Igbokwe was the winner of this season. The well-loved introvert got 38.18% of the votes ahead of drama queen Cynthia “Cee-C” Nwadiora(28.04%) and Oluwatobi “Tobi” Bakre (22.53%). Alex and Nina came 4th and 5th respectively.

Apart from the N25 Million cash, Miracle also won a Sub-Urban Vehicle worth N12 million and a trip for two valued N4.7 million, Television and other electronic items worth N3.3 million.

The BBNaija season 3 winner went back to school for 12 months to study to become a professional and commercial pilot. He now works as a pilot.

This was one of the hottest editions of Big Brother Naija which saw video vixen, Mercy Eke, emerge as the winner. Mercy Eke’s stay in the house is well remembered for her infamous dispute with fellow housemates and Instagram Influencer Natacha ‘Tacha’ Akide – the former getting disqualified from the house.

Since then, the Imo State-born entrepreneur has expanded her business portfolio with a hand in fashion and entertainment. Eke has signed endorsement deals and become a brand ambassador for numerous brands, including Ciroc and Mr.Taxi. In 2020, she made her acting debut in the high-grossing Nollywood film Fate of Alakada.

The Lockdown edition was arguably the most interesting BBNaija to date. Olamilekan Abgeleshe popularly known as Laycon came out victorious after weeks of intense battle with his fellow housemates. Laycon had a landslide victory conveniently defeating his other rivals to cart home with ₦85 million worth of prizes.

Laycon entered the show as the number nineteenth contestant on 19 July 2020 and soon established himself as a fan favorite. Laycon endeared himself to the audience through his intelligence, songwriting skills, and rap abilities. His single ‘fierce’ which was released a year before the competition became the song of the show, regularly played by DJs during the Saturday night party.

After the show, the 27-year-old has gone on to make significant strides, bagging endorsement deals, progressing in his musical career with the release of EPs, and many more.

He is currently the youth ambassador of Ogun State, Nigeria since 6 October 2020. On 3 January 2021, Laycon received a chieftaincy title from the Onipokia of Ipokia, Ogun State, Yisa Adesola Olaniyan as the Akeweje of Ipokia Kingdom, Ogun State at the 2021 Opo Day celebration.

Last year, he won Best New Artist at the African Entertainment Awards USA and got special recognition at the City People Music Award.