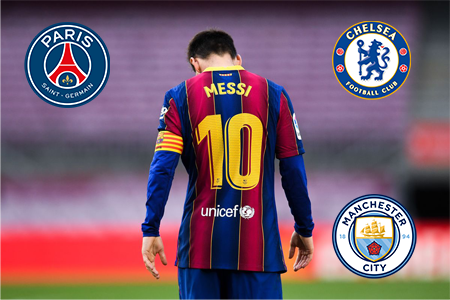 The Football world was rocked on Thursday after La Liga Giants, Barcelona announced that Lionel Messi will no longer continue with them this season after 21 years with the club.

You may also read Is This The End Of Lionel Messi’s Barcelona Era?

According to the statement from Barcelona: “Despite having reached an agreement with Messi and with both parties clearly wanting to sign a new contract, it cannot be finalized due to financial and structural problems [rules relating to the Spanish league].”

The Six-time Ballon D’or winner is now set to play his football elsewhere this season but the question remains, which club could that be.

Lionel Messi is currently a free agent and there are three possible clubs that might be needing the services of the Argentine and they include Chelsea, Manchester City, Paris Saint-Germain.

If Messi decides to join PSG, he would be tagging with Neymar who he played with in Barcelona before leaving for PSG.

A move to Manchester City will see him play under his former coach, Pep Guardiola who also wishes to work with Messi again.

West London side, Chelsea is also willing to enforce their forward ahead of a new season and would not mind signing Messi.