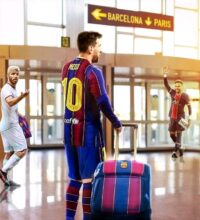 The La Liga 2020/2021 came to a drama filled end yesterday as Atletico Madrid snatched the Liga Trophy through the nose of arch rivals Real Madrid and Barcelona.

While Luis Suarez led this dogged team to the summit, Somewhere in Catalonia lies his eternal friend and ex Barcelona teammate Lionel Messi whose contract ends next month and no one currently knows the next story that’s about to unfold.

Will we finally get to see the 6 times Balon D’or winner Make a long awaited move to a new club/league?? Or will it end in same way it has always ended in previous seasons with him committing to a fresh an improved contract?.

Let’s not forget that by this time last year, we faced same storyline with Lionel Messi making it known to the football world of his intentions  to leave his second home (FC Barcelona), but with so many contractual complications, and also with his contract having a year to run, coupled with Barcelona’s refusal to sell their most cherished asset made the decision not favorable to him.

He later had a change of mind after the case dragged so much and even resulted to a court case. He decided to stay a year longer, which means him running down his contract. He helped the club claim the Copa Del Rey trophy but poor run of form at the latter stage of the campaign meant that the Lionel Messi led team had to settle for a 3rd place LA Liga finish.

The question now is,  Can the Copa Del Rey trophy, Change of president,signing of his best friend and country man Sergio Aguero  and promise of total squad overhaul  be enough to convince the World’s Best Player to commit his future to his much loved Club??  Or are we going to witness a first in lifetime move from the Argentine Magician.

The football world are all ready for the big headline with world richest clubs such as PSG, Man City, Man Utd, and even Real Madrid readying mouth watering bids to bring the Magician to their respective teams.