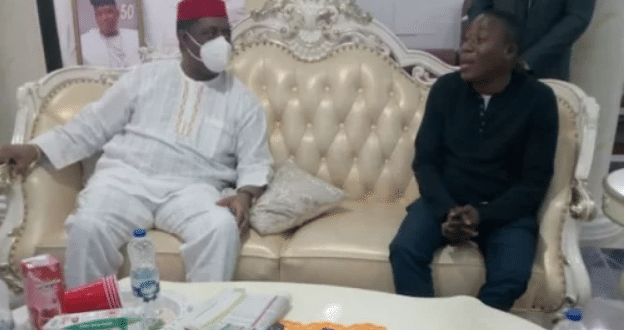 He added that Fani-Kayode is welcome to give him suggestions about how to achieve a single Yoruba nation at any time because he has identified himself as someone who believes in the project.

The declaration by Igboho is coming few days after the Oodua People Congress (OPC) warned him against trusting the former Aviation Minister.

The Oyo state coordinator of the OPC, Comrade Rotimi Olumo, gave the warning in an interview with reporters on Wednesday.

Olumo advised Igboho to be wary of Fani- Kayode’s antic and deceit because he is so smart in causing disunity in Yorubaland.

The OPC leader had accused Fani-Kayode of seeking undue relevance after he suggested that the suspected Fulani warlord Iskilu Wakili recently captured by the OPC and currently in police custody is not the authentic wanted person for alleged killings and abductions.

But Sunday Igboho, in a statement by his spokesman Olayomi Koiki, said he has no problem with anyone who supports the agitation for a Yoruba nation.

He said: “Anyone who is willing to support the agitation for Yoruba Nation is highly welcome, the goal is ‘YORUBA NATION NOW’.

“We know what we want and no going back. Every other side talk is nothing but a distraction. We are fully focused, YORUBA NATION is the goal.

“Let me reiterate, anything you did not hear from I, Sunday Adeyemo (Igboho) or my spoke person Olayomi Koiki of Koiki Media is not a fact.

“Chief Femi Fani Kayode is one of the stakeholders that identifies with us on the struggle of Yoruba Nation agitation.

“He can give his own advice at any time as regards the agitation and there’s no reason to doubt him. We have a 100 percent confidence in him.

“Let’s not talk with envy. We must unite and stay strong in one voice. Therefore, we want to identify with Chief Femi Fani Kayode and any other person that stands for the Yoruba race irrespective of their religion or political party affiliation. Thank you and God bless”.

Monguno disclosed that Gumi was discussing with the bandits as part of his promise to the government to help curb insecurity in the country.

The Sheikh has also constantly called on the government to give amnesty to the bandits.