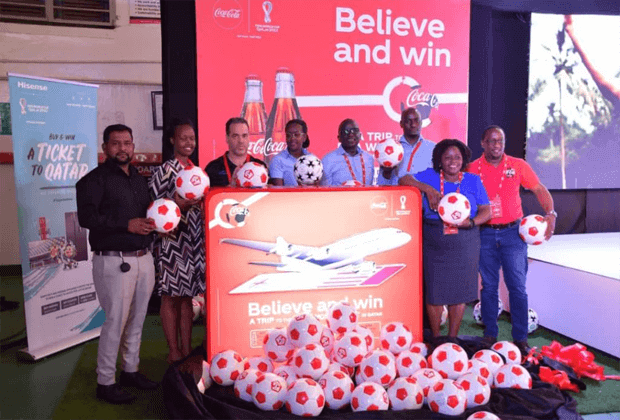 Coca-Cola Believe And Win Promo – How To Play And Win

Coca-Cola Nigeria has introduced a consumer-reward program for football enthusiasts in the nation in an effort to provide Nigerians with an incredible experience prior to the FIFA World Cup in Qatar in 2022.

The Coca-Cola “Believe and Win” Under-the-Crown Promo offers five lucky Nigerians the chance to win an all-expense paid trip to the Qatar 2022 FIFA World Cup as well as instant airtime that many customers across all networks can win. The prizes in this promotion total more than N400 million.

The promo which was unveiled on August 5th at a lavish event in Lagos, where football fans and media personnel were engaged in a variety of fun activities.

At national draws, the regions of Lagos, the West, the East, the Central, and the North would each choose five lucky winners.

The Coca-Cola Believe and Win Under-the-Crown promotion reflects Coca-Cola’s continued support for football as a key passion point across the country and serves as a follow-up to other football-related activities as the FIFA World Cup games begin.

To participate in the Coca-Cola ‘Believe And Win’ Promo consumers are required to purchase any of the Coca-Cola products with a white cap and look under the crown for the unique code. On finding a code, consumers are expected to dial USSD string *8014*1*CODE#, using their mobile devices at no cost to them.

The promo is set to run till October 31, 2022, and football lovers are encouraged to enjoy the refreshing taste of these Coca-Cola beverages while participating in the promo, as dialing the code is completely free.

The Coca-Cola Believe and Win Under-the-Crown promo was conceptualized to give back to loyal consumers by taking 5 winners on a trip of a lifetime to watch the FIFA World Cup live in Qatar, while also giving millions of consumers the chance to win instant airtime to stay connected with friends and family.

Latest US Embassy Recruitment 2022 For SSCE/Diploma/Degree