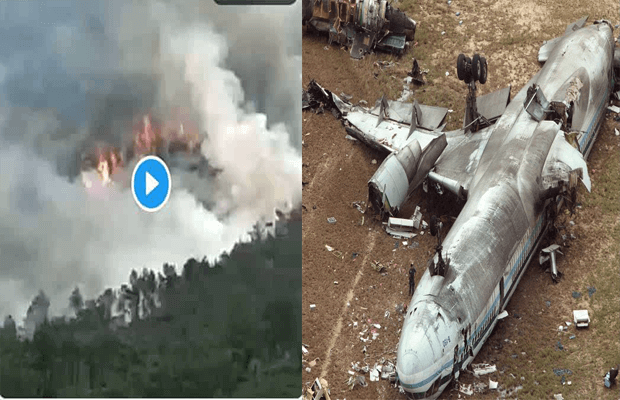 According to a report reaching us, there were 123 passengers and nine crew members on board the Boeing 737-800, said the Civil Aviation Administration of China (CAA).

Flight tracking sites report the plane was in the air for just over an hour and was nearing its destination when it went down in Wuzhou.

The number of casualties and the reason for the crash of the plane carrying 132 people are not yet known.

Rescue crews have been deployed to the area and say a fire in the woods caused by the plane crash has been put out. It is feared no one on the aircraft survived.

The CAA said they had also dispatched personnel to the scene. China has had a good air safety record over the past decade.

Watch the Video of a plane carrying 132 people crashed below..

Video emerging from locals at the crash site in Guangxi where a plane carrying 133 people has gone down. Scale of the fires indicates a slim chance of finding survivors. Hoping that’s not the case. We wait for more information. Prayers with the loved ones of those on board. pic.twitter.com/OltXuXLJ29

The country’s last major plane accident was in August 2010, when a flight from Harbin crashed in Yichun killing 42 people.

All Boeing 737-800 flights with China Eastern have been suspended. To clarify, this is not the 737-Max model which was previously grounded but which has resumed service. The 737-800 is one of the most used passenger aircraft in the world.

President Xi has also made a statement expressing shock at the plane crash in Guangxi saying every effort must be made in the search and rescue operation. Premier Li has said the authorities must do everything possible to comfort and serve the families of victims and seek the facts.

Flippstack reports that the last sourced information on the flight showed it ended at 14:22 local time, at an altitude of 3,225 ft according to FlightRadar24 data.