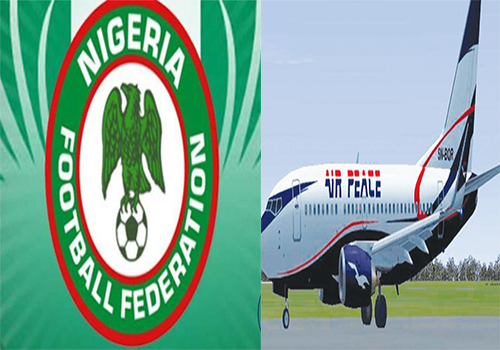 Flippstack understands that the Nigerian Football Federation has signed a partnership deal with one of the largest air carriers in West Africa, Air Peace Limited.

The partnership deal allows Air Peace to become the official airline sponsor of the Super Eagles and Nigerian national teams.

The sponsorship agreement which is for a four-year period, is renewable every year.
Speaking at the agreement signing ceremony in Lagos on Wednesday, NFF president Amaju Pennick said the “initial agreement” is worth N300m with additional benefits to the country’s national teams.

Pinnick who was accompanied to the signing ceremony by the Super Eagles quartet of Alex Iwobi, Joe Aribo, Tyron Ebuehi, and Oghenekaro Etebo, said the partnership was timely as Nigerian players will fly to the Cape Verde match onboard the airline’s brand new Embraer E195.

He said “Air Peace epitomizes unity, patriotism, humanity and selflessness. Ourselves at the NFF have followed not only the meteoric rise of the company but its patriotic fervour and sense of nationalism. It is an organization that believes firmly in the Nigeria project, just as we do.

“This contract covers all the National Teams, from the Super Eagles to the junior teams. Let me say it here that the Super Eagles will be flying to Cape Verde on Monday for their FIFA World Cup qualifier in the latest brand of aircraft just acquired by Air Peace. The NFF is happy to partner with this highly responsible organisation that has Nigeria at the heart of everything it does.”

The Chairman of Air Peace,  Allen Onyema, said his company was excited to partner with the NFF not just because we are enamoured by the hard work and resilience of Mr Amaju Melvin Pinnick in improving the lot of Nigeria’s football on the pitch and in the boardroom, but also because we passionately seek a platform to give Nigerians hope. Football is a huge unifying force everywhere and the same is true of our country.”

Onyema said he would protect what has been signed. According to him, the airline wants to attain 100 per cent self-funding which is their dream.

With the partnership, the airline would fly the Nigerian players and officials to Cape Verde with its new Embraer E195-E2 aircraft.

All The Completed Transfers From The Top 5 Leagues In Europe