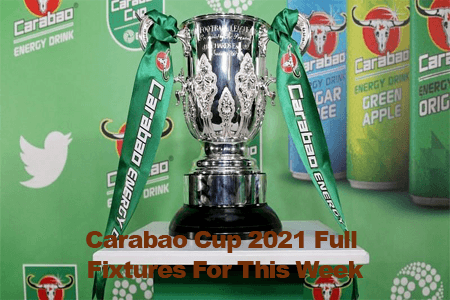 The Carabao Cup which is also known as the English Football League (EFL) Cup is back once again this midweek as teams from the Premier League, Championship, League One, and League Two will be featuring in the third round of the Competition.

Manchester City has been the holders of the cup for four successive seasons after beating Tottenham Hotspur in the finals last season and will be eyeing to make it five successive wins this season while other teams will be eager to stop them this time around.

Both Liverpool and Man City are tied for being the most successful clubs in the competition’s history with eight League Cup titles each which is followed by Manchester United, Chelsea, and Aston Villa with 5 each.

Below are the full fixtures and dates of the Carabao Cup

below are the dates for all of the Carabao Cup rounds for the 2021/22 season: