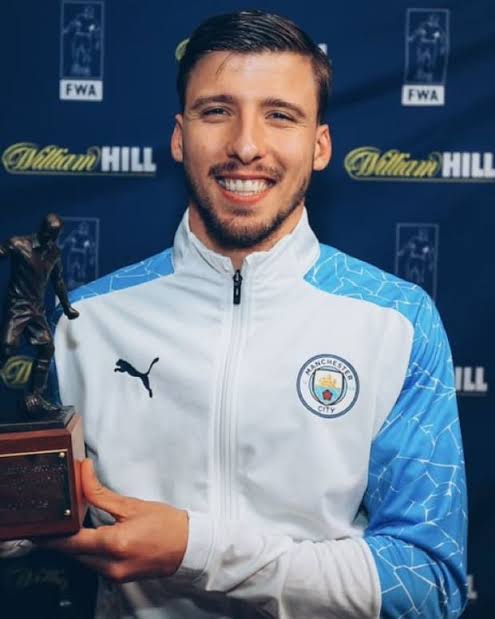 The Manchester City defender, Ruben Dias has been named the Football Writer’s Association Footballer of the year which was voted journalists after a stunning first season with Manchester City in the Premier League.

The Portuguese international became the first to defender to capture the award since 1989 and the second Portuguese player after Cristiano Ronaldo.

Dias moved to City from Benfica for £64million last summer and has since established himself as arguably the best center back in the Premier League.

Dias has enjoyed an outstanding debut season in England, playing 48 times in all competitions and scoring once.

His rock-solid partnership with John Stones proved key as Guardiola’s men recovered from a disappointing 2019-20 campaign to win the Premier League title, with Dias keeping 14 clean sheets in 31 appearances so far.

Aside from playing an integral role in their Premier League triumph, Dias also starred as City won the Carabao Cup and reached next week’s Champions League final.

FWA chair Carrie Brown said: “Ruben Dias turned heads soon after his arrival in Manchester, a 23- year-old belying his age with fortitude, steel, a relentless drive for perfection, and an almost superhuman ability to read and anticipate phases of play.”