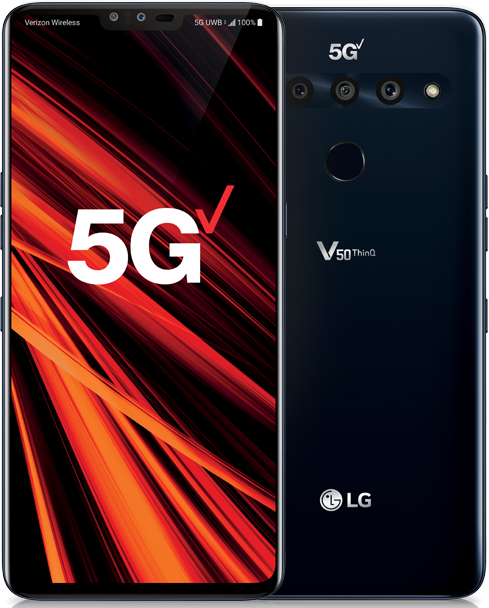 5G is the successor to 4G (or LTE), which succeeded 3G. 4G is dominating today, but 5G is the next evolution. Indeed, after the introduction of 4G technology as an improvement over the previous 3G networks, the enhanced performance was mind-blowing.

As phones and the network infrastructure become 5G-capable, we can all start enjoying faster upload and download speeds, among many other 5G phone benefits.

5G phones are termed the next generation phones because they offer faster connectivity. With a 5G enabled device, you can get blazing speed in surfing the internet provided that you’re in an area with 5G coverage.

Smartphones with 5G support have already started tricking into the market, here we take a look at some of the best 5G phones that has been announced so far.

For some people whenever they hear of 5G phone, all they think of is fast upload and download, well they are right but 5G phones have more to offer than just speedier downloads. We have been able to compile a list of best 5G smartphones and their specifications which are as follows: 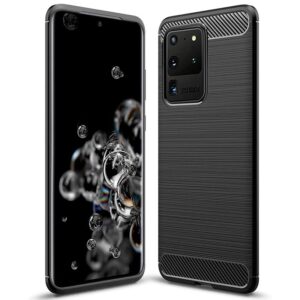 The Samsung Galaxy S20 Ultra was announced on February 11th, 2020 and released on March 06, 2020. It is one of the best 5G devices of 2020, it comes with some amazing specs which makes it outstanding and can rival any handset out there.

On the storage, it features 16GB RAM and 512GB internal storage which enables the device to perform its tasks faster.

That quad-lens rear camera setup isn’t bad either, with its 100x digital zoom for getting you closer to the action, and a sharper 10x hybrid optical zoom. When you’re not drooling over the phone’s high-speed 5G connectivity, you’ll be admiring the quality of the snaps it takes.

Perhaps the only downside is the price, because this is going to cost you a substantial amount of money. With all that in mind, we reckon it’s the best premium 5G phone out there at the moment. 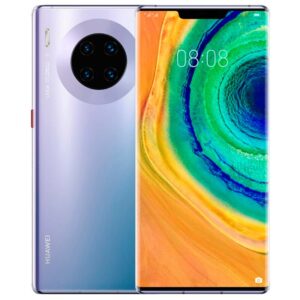 Huawei Mate 30 pro 5G is another entry in our list of best 5G smartphones, the device was announced on September 19th, 2019 and was released on September 26th, 2019. It comes with some great features which makes it one of the best 5G phones worthy of buying.

The device comes with a unique processor HI silicon Kirin 990 5G, it is one of the latest processors in among 5G phones.

It features a quad camera setup which promises to give you a great camera experience. With the help of its super sensing camera functionality, it allows record and watch 4k videos on the device.

Innovative design and great processor make this phone one of the top models of 5G phones in the market for cloud gaming, mass image processing and better graphic results. 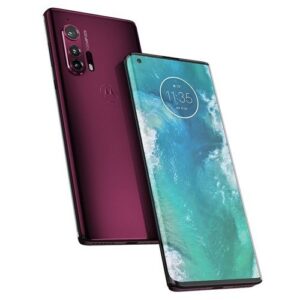 Motorola Edge Plus was announced on April 22, 2020, the device is packed with great functionalities which makes it a worthy contender for the best 5G phones out there.

The main story on the Motorola Edge plus design is its edge to edge display which gives 90 degrees wrap around the left and right side. It comes with a 6.7-inch display that is powered by an OLED panel. It has a screen resolution of 1080 x 2340 Pixels, a screen density of 385 PPI, and a 90Hz refresh rate.

Motorola edge plus houses a quad rear camera at the back which comprises of a 108MP camera that has the capability to shoot 6k videos at 30fps.

The device is powered with an Octa-core Qualcomm Snapdragon processor, an Adreno 650 graphics processing unit, 12GB of RAM, 256GB of internal storage, and a non-removable 5000mAh battery.

Key Specifications of Motorola Edge Plus 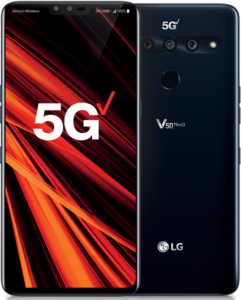 The LG V50 ThinQ 5G is another great 5G device to make this list as it is capped with some amazing features. The device was launched in February 2019 which was the first 5G device released by the company. It features a resolution of 1440 x 3120 pixels at a pixel density of 538 pixels per inch (PPI) and an aspect ratio of 19.5:9, making it one of the best in class phones available today.

It comes with Android 9 Pie version of OS, which is supported with a customary Qualcomm Snapdragon 855 processor to facilitate the 5G network connection. Going to the storage, it comes with 128GB internal storage capacity which is expandable up to 2TB and 6GB RAM, it runs smoothly and can multitask with ease.

Furthermore, it is powered with 4000mAh non-removal battery which lasts long when fully charged. There are other functionalities such as a wireless charging and quick charging, while some users has lauded its waterproof technology as a useful functionality. 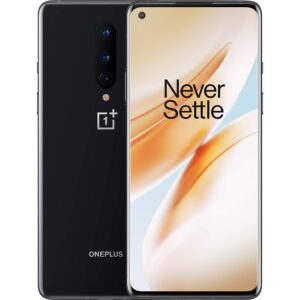 The OnePlus 8 runs on an Octa-core Qualcomm SM8250 Snapdragon 865 processor, just like the other top Android phones with 5G connectivity. It comes with an 8GB/12GB of RAM, 128GB/256GB of internal storage which is massive for a flagship device with that price range.

The device has a fast charging technology, you get a screen with a fast 90Hz refresh rate, and you can charge the phone quickly with OnePlus’ Warp Charge 30T technology. It is powered with 4300 mAh Non-Removable Li-Po Battery which lasts long.

The only down side of this device is the camera, that is where you have to pay the sacrifice because there is no telephoto lens and many of the other pictures produced by the three-camera array don’t measure up to what you can get from other phones. If you are really looking for a powerful phone that has 5G connectivity without breaking the bank, then OnePlus 8 is a great option. 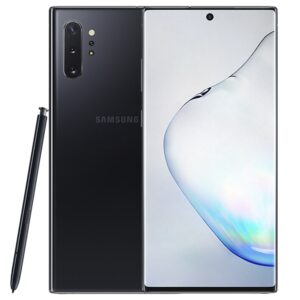 The Samsung Galaxy Note 10+ 5G was released on August 2019, it comes with some amazing features which puts it among the best 5G phones. It arrived just as 5G networks were getting off the ground in 2019, and while it may have been a good choice for early adopters back then, it’s hard to recommend the Note 10 Plus 5G now because its high price of $1,299.

It comes with Android 9.0 pie and will get Android 10 upgrade, it is supported with One UI which has a high user friendly functionalities. It has active noise cancellation with a dedicated microphone and Dolby Atmos sound feature tuned by AKG.

Galaxy Note 10+ features an amazing 12GB RAM which makes the device run smoothly, Qualcomm SM8150 Snapdragon 855 for USA and China to help facilitate the 5G connectivity and has two variants in internal memory as 256GB/512GB.

The device comes with a quad camera setup which includes a 12-megapixel + 12-megapixel + 16-megapixel + 3D Depth VGA camera which makes it outstanding, it also features a single 10-megapixel front camera that offers an amazing selfie photography.

Some of the other features of this top 5G phone from Samsung include video capture boosted by video zooming function which allows 4K video capture at 30fps in default mode with increasing capacity up to 60fps available. 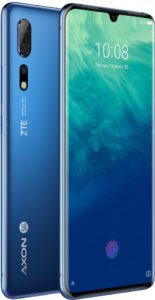 The ZTE Axon 10 Pro 5G was made available since May 2019, it’s the company’s flagship 5G phone. It comes with a smaller screen of size of 6.47-inch, featuring a 2.84GHz processor and Qualcomm 855 Snapdragon chipset but functionalities like waterproof or dustproof technologies that many of the other best 5G phones offer is missing with this model.

This device offers a multiple option of models sporting 6GB, 8GB or 12GB RAM to suit your preferences, depending on how much multitasking or heavy game playing you plan to do with the phone.

It houses a triple rear cameras and a single selfie camera at the front, featuring a 4000mAh Non Removable Li-Po Battery and a Qi wireless charging functionality which seems to be a top specification among 5G phones apart from the regular fast charging capability.

Like some of the other 5G phones that have been recently introduced without a host of unique features to differentiate it from the 4G predecessors, it is only recommendable for the potential of 5G connectivity. Price starts at around $765. 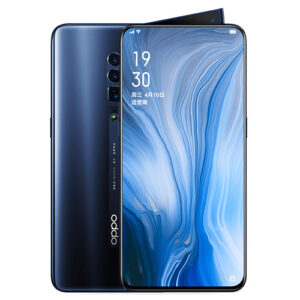 Oppo Reno 5G was the company’s first 5G phone, it was released in May 2019. Oppo being one of the new-age popular smartphone company, packed this device with amazing features. It’s really a great option if you are looking for an affordable product that can offer 5G mobile connectivity.

The Oppo Reno 5G spots a big screen of about 6.6 inches, screen resolution of 1080 x 2340 pixels and an impressive 85.5% screen to body ratio which makes it a perfect gadget for multimedia functionality.

It runs Android 9.0 Pie version of OS and it comes with a Qualcomm (sm8150) Snapdragon (855) chipset which is powered by an octa-core CPU. It features an Adreno 640 CPU for a perfect gaming experience.

Reno 5G comes with an amazing 8GB RAM and 256GB internal memory to support the smooth running of the 5G connectivity. It also has a fast charging capability.

To boost its claim as one of the best 5G phones, Oppo guarantees its 5G connectivity to allow smooth and lag-free mobile internet running as per operator’s service so that streaming of high-resolution content and cloud gaming become effortless. 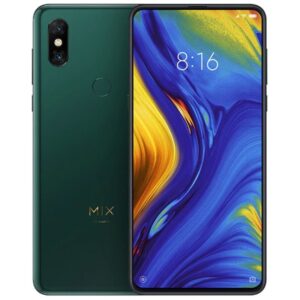 The Xiaomi Mi Mix 3 5G is another 5G smartphone that made the list, although it’s a mid-range device and its specifications are not as great as the best 5G phones that are trying to corner the premium flagship smartphone market.

It is among the most affordable 5G options available right now. It runs Android 9 Pie version of operating system and MIUI 10 version of user interface to give the device a great user friendly experience.

Xiaomi Mi Mix 3 5G features a whooping 6GB RAM and a screen size of 6.39-inch display but weighs a little heavy at 225gm. It comes with 3800mAH battery which is lower than other 5G phones currently available.

Some users have rated the phone average compared to some of the top models from other companies such as Samsung or OnePlus, while the unavailability of wireless charging in a future technology phone has been a source of disappointment for some.

I will only recommend this device for people who wants an affordable 5G capability phone with decent features. Price starts at around $289.

This rounds up our best 5G phones, although more will join as 2020 is going to be a year of 5G smartphones to unfold.