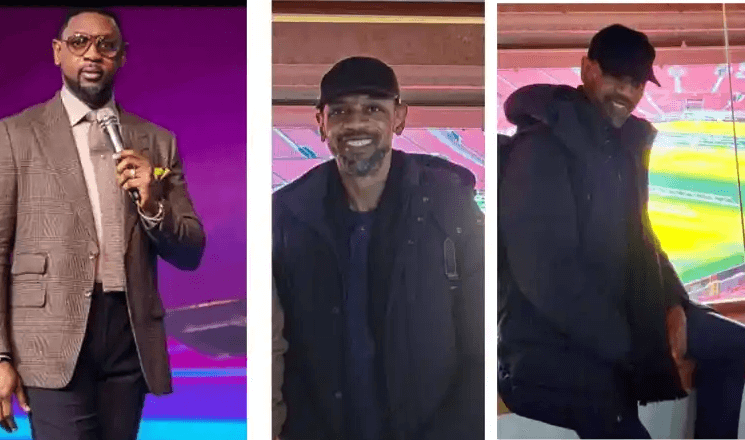 In this article, we will be looking at the lifestyle of pastor Biodun fatoyinbo, Controversies, scandals, current health situation, and his biography.

Pastor Biodun Fatoyinbo Of COZA Shows Massive Weight Loss In New Photos which has made people talking about him.

According to report gathered by Flippstack Founder Commonwealth Of Zion Assembly, COZA, Pastor Biodun Fatoyinbo reportedly suffered a stroke a few months ago, but has overcome the medical emergency and he is  well and alive.

The controversial cleric who has been away from the spotlight for about seven months recently put out new pictures of himself after he survived the stroke.

He is currently in Manchester with his family and some of his church members for a church programme.

Biodun Fatoyinbo was Born on 1st January, 1976 in Kwara State,  the Nigeria Pastor , Biodun Fatoyinbo is the senior pastor and founder of the Commonwealth of Zion Assembly (COZA) with worship centres across Nigeria. Popularly and fondly called Pastor B, he is widely listened to as a worldwide preacher of God’s word.

The university later denied having any records of Pastor Biodun studying in the school which precipitated a viral video of him in 2017 on social media. He was said to later confirm the content of the video stating he was once a chief priest of the Black axe confraternity which lead to the termination of his studentship. Pastor Biodun Fatoyinbo later went back to school, where he graduated from the University of Benin.

Pastor Biodun’s COZA started out as a Non-Governmental Organization (NGO) in Ilorin, Kwara State in 1999 with four pastors and a very small congregation. The church has since grown into a megachurch with over 20,000 members and an ever-increasing online fellowship. Launching out, the church established 4 other campuses starting with the Lagos campus in 2012, the Port Harcourt campus in 2016, the Abuja campus in 2008, and, the Dubai campus in UAE in 2017. The church also grew a music band called the Gratitude Music Band which won the UK Gospel Touch Music as a result of its hit single music “Raba Raba Eh”

A multi-talented man of God, Pastor Biodun is a good singer and guitarist. He believes that Christians should be able to influence society with kingdom principles, and says his Mission is: TO RAISE A TAKEOVER GENERATION. The ministry itself, COZA, firmly believes in the philosophy of “Build the people and the people will build the organization.

Pastor Biodun Fatoyinbo is one of the richest Nigerian pastors. He also owns a university, and his church is one of the biggest in the country. His net worth is estimated to be at about $12 million

Pastor Biodun Fatoyinbo is the senior pastor and founder of the Commonwealth of Zion Assembly (COZA). He is believed to have a congregation of over 20,000 people, physically present at his various branches in Nigeria and Dubai. It is estimated that around forty thousand other persons listen to his messages online across other continents.

There have been lots of talks and controversies around Biodun Fatoyinbo and his ministry, of which are related to sexual immoralities.

In the year 2013, Ese Walter, a former member of COZA revealed that she had a week-long affair with the pastor. The lady admitted the pastor did not rape her but that he was already married at the time of the affair. Pastor Biodun denied these allegations and though the news raved in public and on social media, his church came out of it just fine.

However, in May 2019, popular Nigerian singer, Timi Dakolo subtly accused the pastor of sexual immorality when he said ‘… your pastor leaves a trail of broken women, sexually abused and mentally strangled… he handpicks his victims and ruins them’. He said this in an Instagram post and went on to accuse the pastor of not only sleeping with but raping his wife, Busola Dakolo. Busola is also a celebrity photographer and also a former member of COZA. This news created even more buzz in the social media space than even the former one.

Pastor Biodun also denied this allegation and swore he has never raped anyone before, not even when he was an unbeliever. In response to the accusations, he stepped down from the leadership of the church till August 2019. However, in November 2019, the case against him was dismissed by an Abuja court as empty and purely sentimental because there was no concrete evidence since the act took place twenty years ago.

Many celebrities, as well as Nigerians, reacted to the issue across all various social media platforms; have reacted on Facebook, Twitter, and Instagram, with their different opinions on the matter, some on the side of the pastor while some on the side of Busola with the hashtag #istandwithbusola

How To Apply And Pay For Nigerian Passport Online (Full Guide)