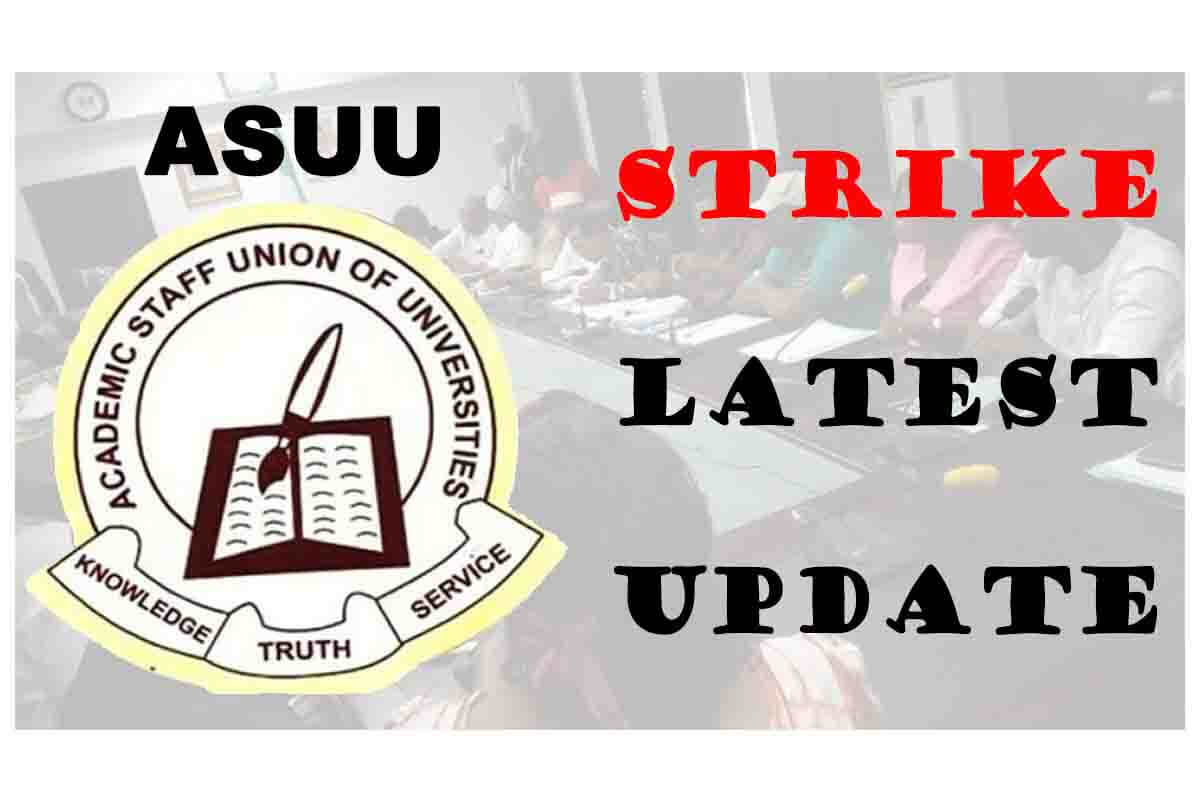 The strike embarked upon by the Academic Staff Union of Universities (ASUU) has been extended by another four weeks.

The development was confirmed on Monday in a statement by the ASUU President, Professor Emmanuel Osodeke on behalf of the union.

Naija News reports the decision to extend the strike was reached at the end of the union’s National Executive Council meeting held at its national secretariat in Abuja on Sunday and concluded in the early hours of Monday.

ASUU explained that the time extension is to allow the federal government enough time to meet their demands.

The statement signed by Osodeke reads in part: “following extensive deliberations and taking cognisance of Government’s past failures to abide by its own timelines in addressing issues raised in the 2020 FGN/ASUU Memorandum of Action (MOA), NEC resolved that the strike be rolled over for four weeks to give Government more time to satisfactorily resolve all the outstanding issues.

Armed with the progress made so far, the Minister of State for Education, Rt Hon Goodluck Nanah Opiah, has reassured that the federal government is committed to ending the strike action of the Academic Staff Union of the Nigerian Universities, ASUU.

The minister who had earlier given a hint of this development said that given the charge of President Muhamadu Buhari concerning ending the industrial dispute, all relevant stakeholders involved in the resolution have moved into action and working towards achieving a positive result.

Opiah made the disclosure during a meeting with Women in Politics, WIP who visited his office to discuss the strike challenges in tertiary instructions in the country and other matters connected to national politics.

The Kaduna State Governor, Nasir El-Rufai, has threatened to declare vacant the position of all lecturers of the Kaduna State University (KASU) who are currently involved in the ongoing Academic Staff Union of Universities (ASUU) strike.

Speaking on a radio programme in Kaduna on Wednesday, El-Rufai directed lecturers of KASU to return to classrooms.

While insisting that the lecturers had no reason to join any strike, the governor said ASUU had a problem with the federal government and not with the state government.

El-Rufai said, “The Acting Vice Chancellor has assured me that they will resume, and I have asked them to find out if they actually resumed work because I initially instructed that their salary be stopped. But I was later told they didn’t join the strike, so I asked that it should be investigated, and those that collected salary and joined the strike will be asked to refund the salary.

“If this continues, I will wake up one day to sack them all, I swear to God. We will sack them all and declare their positions vacant on the pages of newspaper. They once did same thing and we gave them warning, now they repeated it. I’m only waiting to receive the report from the commissioner for education. I swear to God, we will sack all those that joined the strike if they refuse to resume work.”

The Nigeria Labour Congress, NLC, has finally embarked on a two-day protest it promised, to register its displeasure over the lingering ASUU strike and other issues affecting the country.

The Congress has embarked on a nationwide protest in solidarity with the Academic Staff Union of Universities, ASUU, and other affiliate unions over the lingering industrial action in public universities in Nigeria.

In a circular sent to state councils of NLC by the national secretariat and obtained by Vanguard, national president, Comrade Ayuba Wabba told fellow workers that the national days of protest were in support of unions in Nigeria’s public universities who are fighting for quality education.

“In line with the decisions of the National Executive Council (NEC) meeting of the Nigeria Labour Congress held on the 30th of June 2022, we have scheduled as follows the national days of protest to get our children back to school and support our unions in Nigeria’s public universities fighting for quality education.

“You are requested to immediately convene the meetings of your SAC to disseminate this information and to fully mobilize workers in the states for this very important protest for good governance,” Comrade Wabba said in the circular jointly signed by the NLC general secretary, Comrade Emmanuel Ugboaja.
Advertisement

Kano State Governor, Abdullahi Umar Ganduje, has said that unless an urgent solution is reached on the five-month-old strike action embarked upon by the Academic Staff Union of University (ASUU) this issue may not only destroy the students’ academic performance but may eventually lead them to join miscreants, thereby posing a serious threat to the nation.

Ganduje made the assertion on Tuesday in Kano at the Government House, Tuesday, while responding to the peaceful protest organised by the Nigeria Labour Congress (NLC) in solidarity with the cause of the striking ASUU, saying the crisis must be resolved to save the system.

He said that “these students for the past five months, have been idle at home, noting that an adage says,”the devil finds work for an idle hand.”

They may by mistake or willingly join bad gangs out of desperation to cause crime but God forbid this not to happen.

According to him, the ongoing strike has spelt doom on the nation’s education, the parents and also on the students, saying that this crisis must be resolved to help save the system. We don’t want the system to collapse in this country at all.

Ganduje noted that the striking University lecturers are in the strike action “… to save the system from collapsing.”

While lamenting the plight of students across the country, for being idle all this while, he revealed that, “Myself and my colleagues from all the 36 states, irrespective of our party differences are concerned about the prolonged strike action and we will put our heads together to bring an end to the crisis.”

The Nigeria Labour Congress (NLC) has begun its solidarity strike with the striking Academic Staff Union of Universities (ASUU).

It is understood reports that NLC members, other unions, and civil society groups have gathered under the Ikeja bridge to begin the protest.

As of the filing of this report, vehicular movements have been disrupted and business activities around the area have been shut down over fear of attack.

Recall that the NLC had in a statement on July 17 announced a protest to force the Federal Government and ASUU to resolve their issues and suspend the lingering strike.

The NLC, which said the protest would take place in all 36 states and the FCT, faulted the Federal Government over its handling of the industrial actions that have grounded activities in public institutions.

It also called on the government to pay the salaries of the striking workers, which it said had since “been frozen on the premise of the so-called ‘no work-no pay’ policy”.

The NLC asked the government to immediately conclude the ongoing negotiations with unions and implement the agreement arising from the negotiations in a bid to ensure public universities resume normal activities.

ASUU: Power sector, transport workers, and others may shut down as NLC begins protest

Following the Academic Staff Union of Universities (ASUU) prolonged strike, the Nigeria Labour Congress (NLC) and some other unions will launch a nationwide protest today (Tuesday).

Recalls that university lecturers on February 14, 2022, shut down public universities over the inability of the Federal Government to implement agreements the two parties entered into in previous years.

Despite negotiations and interventions by concerned citizens, the FG and the ASUU are yet to settle their differences after nearly 6 months.

The NLC had alerted Nigerians that July 26 and 27 would be National Days of Protest across the country to force the FG and the striking lecturers to resolve their issues and suspend the lingering strike.

The union had said the protest would hold at all the State capitals, while the mega rally would take place in Abuja to pressure the Federal Government to meet ASUU’s demands.

About 40 NLC affiliates, including aviation, bank, oil and gas, electricity, construction workers and power holding companies are expected to participate in the protest.

ASUU Reveals Only Thing That Can End Lingering Strike

The Academic Staff Union of Universities (ASUU) has said that the lingering strikes would not end until responsible and responsive people are in government.

In a statement on Sunday by the Chairman, ASUU, University of Ibadan chapter, Prof. Ayo Akinwole, said only the signing and implementation of a renegotiated 2009 Agreement will end the ongoing strike.

Akinwole said that ASUU members had sacrificed so much on their welfare, lamenting that the Federal Government owed their members over nine-year allowances.

Akinwole stated that Nigeria is in the hands of incompetent people due to the collective negligence of Nigerians.

ASUU Strike: As NLC Rouses From Drowse In Protest

After a long period of shying from its avowed objectives of promoting and protecting the interests of its members and affiliates, the Nigeria Labour Congress (NLC) let out a flicker of “Aluta!” when it issued a notice of a nationwide protest over the lingering strike by the Academic Staff Union of Universities and other unions in Nigeria’s public university sector.

While NLC stayed aloof and played possum, it was right to ask of the utility of a congress whose favourite refrain is “solidarity forever” yet couldn’t fraternize with distressed comrades forced to down tools for five months running.

With the due date of the two-day protest inching closer, the Federal Government has since entered panic mode, apparently using all manners of tricks to dissuade the umbrella body of workers in the country from defending public universities.

We cannot but question why the labour congress waited till this time to protest against the government’s careless treatment of ASUU and other unions in the tertiary education sector. Ordinarily, organized labour should be citizens’ voice against marginalization, poor economic policies that are perceived to bring hardship upon the people, oppression, or welfare of workers and others. Unfortunately, NLC had been playing possum on these noble roles.

The Federal Government of Nigeria has appealed to the Academic Staff Union of Universities (ASUU) to call off its strike and return to the classroom.

The Minister of Education, Adamu Adamu, appealed on Thursday in Abuja during the 2022 policy meeting on admission to tertiary institutions in Nigeria.

Adamu appealed to ASUU and all other labour unions in the public tertiary institutions to consider the future of the students and allow dialogue to be fruitful.

He stated that the government is yearning for a stable academic calendar but needs the cooperation of the unions to make it work.