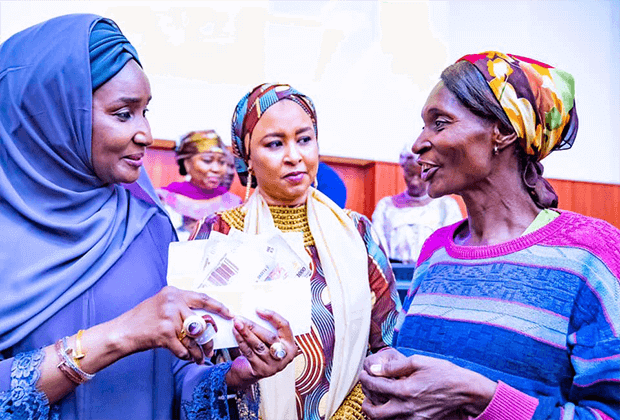 The Federal Government has begun the disbursement of N20,000 each to the vulnerable and poor, as the second round of the programme flagged off in Abuja on Thursday at the FCDA Hall, FCDA Secretariat Abuja Municipal Council.

The Minister of Humanitarian Affairs, Disaster Management and Social Development Sadiya Um ar Farouq re-launched the programme which hitherto was known as Cash Grant for Rural Women. The minister said that it will now be known as Grant for Vulnerable Groups, to encourage inclusivity.

On the occasion, the Minister stated that the Grant for Vulnerable Groups (GVG) programme was introduced in 2020 to sustain the social inclusion agenda of President Muhammadu Buhari’s Administration.

“It is consistent with the national target of lifting 100 million Nigerians out of poverty in 10 years. It is designed to provide a one-off grant to some of the poorest and most vulnerable women in rural and peri-urban areas of the country. A cash grant of N20,000.00 is being disbursed to poor women and youths across the 36 States of the Federation and the Federal Capital Territory.

“Our target in the FCT is to disburse the grant to over 2,900 beneficiaries across the 6 Area Councils. In line with President Muhammadu Buhari’s social inclusion, 70% of the total number of beneficiaries is for women while the remaining 30% is for men. In addition, about 15% of the total number of beneficiaries is specifically allocated to the segment of the population with special needs, including Persons with Disability (PWDs), internally displaced persons (IDPs) and senior citizens in the FCT”.

In her remarks, the National Coordinator of Conditional Cash Transfer, Hajiya Halima Shehu also announced that the Grant for Vulnerable Groups is now fully digitized.

“From the National Cash Transfer office, we have fully digitized the process. We have over a 1.9million beneficiaries that now have NUBAN accounts across commercial banks in the country. This is a huge milestone because records have shown that there is no programme of this type that has achieved such a success story.

“Six months ago, we flagged off the digitization. All our beneficiaries now have debit cards from different banks across the country. We have given them a lot of coaching and mentoring financially and so we can now say that they have been financially included because they are now fully banked”.

One of the beneficiaries, Grace Agu thanked President Muhammadu Buhari for his benevolence, adding that the money will support her petty business.

The Minister performed a symbolic disbursement of the grant to some beneficiaries and urged them to use the cash judiciously.