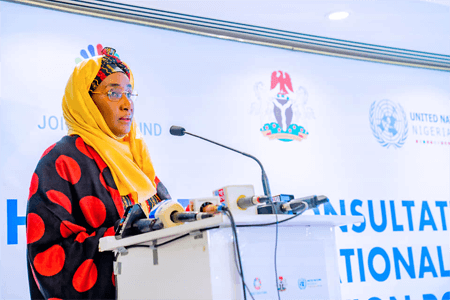 In her recent post on her Facebook page, she broke down her recent week’s activities in order to keep the public updated on the work she and her ministry are putting on to move the country forward.

In her Update, She wrote:

Highlights from my week

On Tuesday, I attended a High-Level Consultation on the proposed National Social Protection Policy during which I noted the need to prioritize attention and action regarding the vulnerable members of our society. I harped on the successes being recorded by the National Social Investment Proprammes in this regard while calling for more action.

On the same Tuesday, I launched the National Multihazard risk analysis dashboard and website. I commended #nemanigeria and #unicefnigeria for the laudable initiative.

The overarching objective is to operationalize early warning signals and disaster risk assessment to call attention to issues before they morph into humanitarian crises.

Same Tuesday, I reaffirmed Nigeria’s position on the plight of Refugees at the virtual Global Compact for Refugees where I began by commending UNHCR for organizing this High-level Official Meeting within the framework of the GCR.

The meeting was critical for me and my ministry @fmhdsd as it avails States a platform to dialogue on the progress of implementation of the pledges made during the first GCR held in 2019 while appraising the lessons learned from the responses of Member States to the COVID 19 pandemic and the circumstances it created.

In 2019, Nigeria demonstrated its commitment to the implementation of the GCR by making four pledges before the UN member States at the first GCR in Geneva. These pledges are as follows:

Pledge 1: to include refugees, IDPs, returnees, and their host communities in National Government development plans;

Pledge 2: to strengthen its protection capacity;

The final two were to:

Pledge 3: To ensure the availability and access to durable solutions for refugees and IDPs;

Pledge 4: to continue playing an active and constructive role in regional and sub-regional efforts to address the root causes of displacement

Following on those pledges, Nigeria has made concerted efforts towards their implementation and this is driven by Nigeria’s open protection environment and commitment to host refugees which are key to the overall implementation of the GCR.

We have put in place a crucial foundation for the inclusion of Refugees, IDPs, and returnees into National services such as education, health, WASH, identification, and promoting self-reliance within the national economic development framework of the country.

Presently, the Government is finalizing the 2021-2025 Nigeria Medium-Term Development Plan (MTDP) to incorporate issues of refugees and IDPs and include budgetary provision for projects that will address them headlong.

On Wednesday I joined other cabinet-level colleagues at the weekly Federal Executive Council (FEC) meeting presided over by HE President Muhammad Buhari Important issues of state were discussed and resolutions reached.

On the same Thursday, I was the chief host of the first presidential summit on aging organized by the National Senior Citizens Center (NSCC).

In my comments at the event, I took time out to appreciate HE Muhammadu Buhari for mainstreaming the concerns of the aging especially with the signing of the Disability Act 2018 and the National Senior Citizen Centre Act 2017. These are clear demonstrations of a President who has the poor and most vulnerable at heart.

His attention to the elderly has also been underlined by the establishment of the Federal Ministry of Humanitarian Affairs, Disaster Management and Social Development to coordinate and provide Social Protection

The attention being given to this vulnerable group is in alignment with the African Union Africa Common Position on the Rights of Older People (African Union 2012), adopted in 2013.

The common position recommended a rights-based approach to development which will accelerate social inclusion for older persons. Other recommendations include the creation of national programmes to promote societal awareness of the rights of older persons and their mainstreaming in SDGs.

The Twenty-Sixth Ordinary Session of the AU Assembly in Addis Ababa on 31 January 2016 adopted the framework that included a wide-ranging set of measures to ensure the rights of older people and ensure they would receive support where appropriate (African Union 2014).

With domestic attention being paid to the elderly, it is safe to say that Nigeria is on the right track in promoting the rights of older persons and ensuring healthy aging through the creation of the National Senior Citizen Centre.

Have a great week.