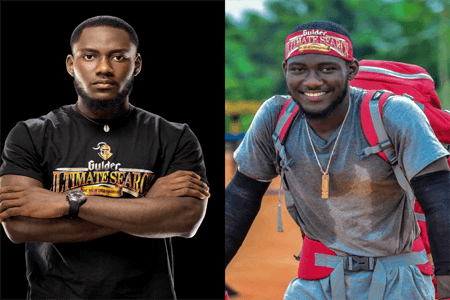 The Gulder Ultimate search has finally come to an end with Odudu Otu emerging as the winner after being the first to find the Ultimate Mirror.

The Gulder Ultimate Search GUS which kicked off on Sunday, October 16 came to an end today after weeks of fierce competition in the season tagged The Age of Craftsmanship.

The contestants were shortened to a total of four finalists left to battle for the prize money of N50 million.

The four contestants crossed over to the other side of the first on a single rope with clues and artifacts that were found from the day before as Tosin lagged behind others as he struggled on the suspended rope bridge with his shield. The other three continued to forge ahead in the forest.

Each man fought for himself as they struggled to find clues that will lead to the treasure chest that they seek.

Damola dipped his hands into the murky swamp water for clues, while the other two searched on dry land. Odudu found a rope in the ground which the other two helped to pull out as Toke Makinwa who had been waiting on the spot, commanded him.

Odudu and his teammates tugged on the rope till it revealed the treasure chest of Akudo which held secrets. A victorious Odudu dragged his find amidst shouts of victory as his mates congratulated him.

On opening the chest, Odudu found a mirror and a scroll whose content he read out loud. The scroll congratulated Odudu and the mirror showed a reflection of the winner he had become.