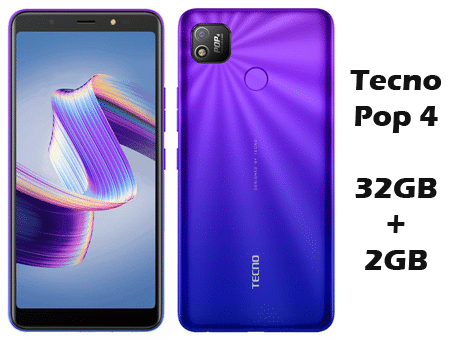 The Tecno Pop 4 is packed with two cameras, a single front facing camera and a single rear camera.

The rear camera is a 5-megapixel main camera which is accompanied with a LED Flash. It is also capable of recording 720p videos at 30fps.

Going to the front, we have a single 8-megapixel front facing camera which has AI beautification to beautify your selfie images. It also features Face ID and a LED flashlight.

The Tecno Pop 4 comes with a glass front and plastic back design. On the top, it has a small bezel which houses the front facing camera and the speaker. It also has a similar bezel at the bottom but there is nothing on it.

On the rear panel, we have the rear camera which is accompanied with a LED flash and beside them comes the fingerprint scanner. Going down, we have the Tecno branding which indicates it’s a Tecno smartphone.

Moving to the front, the smartphone houses a 6.0-inch display which has resolution of 480 x 960 pixels and a 73.2% screen-to-body ratio. The screen is also protected with a corning gorilla glass and also a charging indicator embedded on it, so you can see your charging status when it is charging. 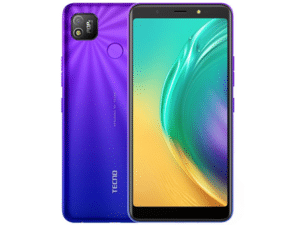 The smartphone is packed with a Quad-Core processor which has a clock speed of 1.3GHz and it is accompanied with MediaTek MT6580 chipset which helps in the smooth running of the device. It also features Mali-400MP2 to handle the graphics and multimedia functionality on the device.

Going to the memory, it comes with 2GB RAM and 32GB inbuilt storage. It also has option for memory expansion via microSD card upto 128GB.

On the software, it runs Androind 10 Go Edition version of operating system accompanied with the tecno’s HiOS user interface.

The Tecno Pop 4 lacks 4G network which means we are left with 3G network. Other connectivity includes FM Radio, GPRS, Bluetooth and Wi-Fi.

On the battery, it is powered with a massive 5000mAh battery which when fully charged has 23.6 hours calling, 10.8 hours watching video and 69.2 hours listening to music via earphone.

The Tecno Pop 4 price in Nigeria ranges around 35,000 – 37,000 Naira depending on the outlet or dealer. The smartphone comes in two different colors which includes Ice Lake Green and Dawn Blue.