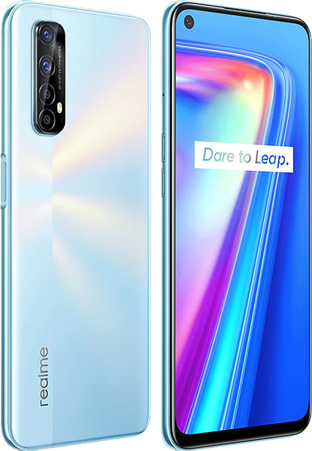 Realme has officially announced a new smartphone in India called Reame 7. The smartphone comes with some amazing features such as a Helio G95 gaming MediaTek chipset, Quad-rear camera setup and a bigger battery capacity of 5000mAh.

The Realme 7 comes with similar camera features with what we saw in Infinix Zero 8. It features Quad-rear camera setup and a single front facing camera.

The Quad-rear camera setup consists of Sony IMX682 64-megapixel primary shooter and it is accompanied with a 119-degree field-of-view 8-megapixel, a 2-megapixel portrait lens and a 4cm focal length 2-megapixel macro lens.

On the front, we have a single camera which consists of a Sony IMX471 16MP which has HDR features and can record 1080p video at 30fps. 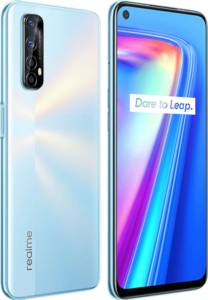 We have a normal design that most smartphone comes with, a plastic body and a front glass. I comes in two different colours which includes Mist White and Mist Blue.

The rear panel houses the quad-rear cameras accompanied with a LED flash and a Realme tag which indicates it’s a Realme smartphone. We have a side-mounted fingerprint scanner which is pretty cool.

The Realme 7 features an octa-core processor, accompanied with 2.05GHz Helio G95 chipset and Mali-G76 MC4 to handle the graphics department.

Going to the software, the phone runs Android 10 version of OS, supported with Realme’s user interface.

The Realme 7 comes with a dual Nano SIM that supports 4G LTE network and there is no 5G support. Other connectivity include a Bluetooth 5.0, Wi-Fi, 3.5mm headphone jack.

It is powered with a whooping Non-removable 5000mAh battery which is supported with 30W fast charge.