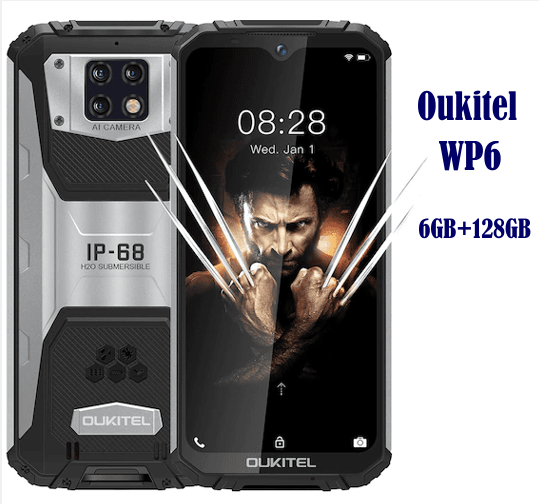 Oukitel WP6 was released in March 2020 and it comes as an improvement to the previously released Oukitel WP5. It comes with some amazing features such as a 10,000mAh battery, 128GB built-in storage, Triple camera and many more.

Oukitel WP6 comes with an improved camera setup compare to what we saw on Oukitel WP5. The camera department of Oukitel WP6 consists of Triple rear cameras and a single front camera.

The design aspect of Oukitel WP6 is not what we normally see on every smartphone, it comes with a kind of rugged design that fits in extreme conditions. It has a kind of metal body and a 1.1mm Gorilla glass upfront.

Oukitel WP6 comes with 6.3-inch FHD+ IPS LCD display that has a resolution of 2340 x 1080 pixels and pixel density of 403ppi. It features an IP68 rating, which dictates is the ability to survive in 1.5m depth of water for about 30mins.

The Oukitel WP6 comes with an Octa-core MediaTek Helio P70 processor accompanied with ARM Mali-G72 to handle the graphics department. On the storage, we have a 6GB RAM and 128GB internal storage which has an option for memory expansion via microSD card up to 256GB.

The Software department comprises of Android 9 version of OS supported with the Oukitel’s user interface.

The phone internet connectivity is based on 4G LTE which is accompanied with other connectivity features such as Bluetooth 5.0, WiFi Hotspot, USB Type-C port etc.

It is powered with a mouthwatering 10,000mAh Non-Removable Li-Po Battery which has a talktime of upto 29 hours.

One thought on “Oukitel WP6 Price and Full Specifications”