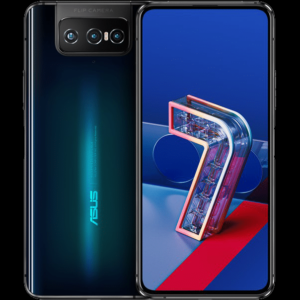 The Triple camera setup is made up of a 64-megapixel main camera, 8-megapixel telephoto lens and a 12-megapixel ultrawide lens.

This triple camera setup is capable of shooting powerful 8k, 4k, and 1080p videos at 30/120/240fps. I will like to admit that the smartphone’s camera is its selling point.

In the design department, the smartphone features corning gorilla glass 6 upfront, a gorilla glass 3 on the rear panel and an aluminium frame. It will be comes in two colours which includes Aurora Black and Pastel White.

The rear panel houses the swiveling triple camera setup which accompanied with a LED flash. Below we have the ASUS tag, which indicates it’s an ASUS smartphone.

It will not feature a punch hole or notch screen because of the flip-out camera module that acts as both the selfie and rear camera. 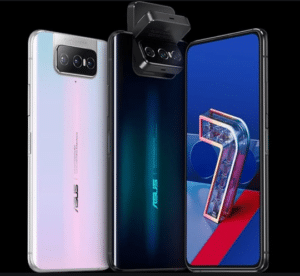 In the memory department, It comes with a bigger memory of 256GB and an 8GB RAM, it also have an option for memory expansion of up to 2TB via microSD card.

The smartphone does not have 5G support which means we will only get 4G,3G and 2G network support. Other connectivity features includes Dual-band WiFi, Bluetooth 5.0, NFC.

It is powered with Non-removable 5000mAh battery which is supported with 33W fast charge mechanism.